A trip to Dodger Stadium this weekend appears to be just what the San Francisco Giants needed to end a three-week run of losing baseball. The Giants solidified their teetering hold on first place in the First Division by winning the first two games of this weekend's series. 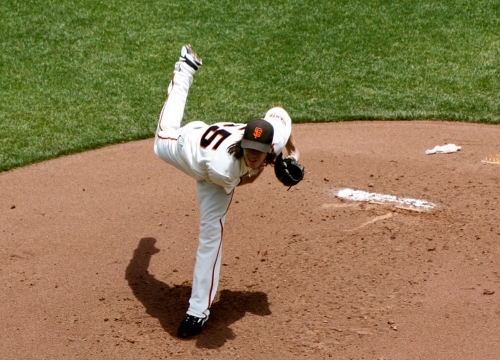 So, the San Francisco Giants are in Los Angeles this weekend, and we think, by now, that we know what that means.

It means that Friday night, within an hour of the first pitch in this weekend's three-game series, Dodgers starting pitcher Mike Bolsinger loaded the bases before hanging a breaking ball to Buster Posey, who put it very quickly into the left-field seats to give the Giants a 4-1 lead in the third inning. Grand slam.

The game kind of went on like that Friday night. The Giants won, 9-5.

Saturday afternoon, Dodgers right-hander Carlos Frias hung a two-strike, two-out pitch to Justin Maxwell, who turned it into a two-run homer to give the Giants a 4-2 lead in the fifth. Brandon Belt added a two-run homer for the Giants in the sixth, finishing off a 6-2 San Francisco win.

Middle-inning, game-breaking homers are the kind of events markinig encounters this season between the Dodgers and Giants. The Giants have won nine of those 11 encounters already this season. By early Saturday evening, this series was more of the same.

A visit to Dodger Stadium has come as something of a tonic for the Giants, particularly in the First Division, where their lead was diminished to one-half game this week while the Tampa Bay Rays took three of four from the Washington Nationals. With their wins on Friday and Saturday, the Giants (14-4 in the First Division) are back to a 1½ games ahead of the Rays (13-6) in the top tier.

From a more conventional perspective, the Giants had been less than an ordinary club for the last three weeks. Starting on May 30, they lost two straight to the Atlanta Braves, then three straight to the Pittsburgh Pirates, all at home. They went on the road to win two of three against both the New York Mets and Philadelphia Phillies, hardy a signature achievement.

Then the Giants came back west to lose three straight against the scuffing Arizona Diamondbacks and split four games against the wuffling Seattle Mariners.

Sounds like a ball club that needed a visit to Dodger Stadium for a set of games against more than $250 million of baseball talent assembled by the brain power of elite universities.

In the First Division right now, the Dodgers are 6-15, the last-place team by a two games. That includes a combined performance of 4-14 against the Giants and St. Louis Cardinals.