First Division: Three ways the Rays do it

The Tampa Bay Rays weren't supposed to win this year, but they lead the American League East and they're thick in the race for the First Division and the East League. The Rays succeed by doing a lot right under the radar. 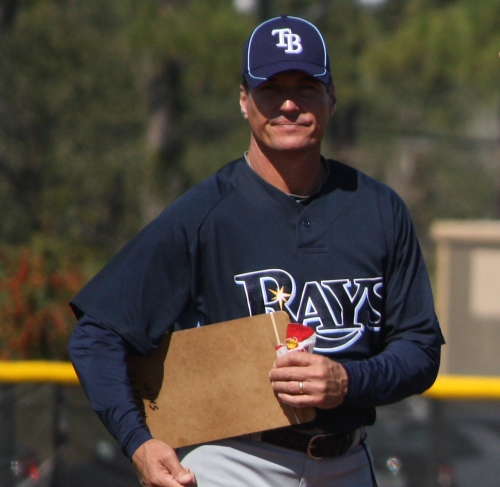 After six straight winning seasons – five with 90 or more wins – the Rays fell to 77-85 in 2014, and the losses didn't end there. Within the same four months in 2014, the Rays traded pitching ace David Price, lost manager Joe Maddon to the Chicago Cubs and lost general manager Andrew Friedman to the Los Angeles Dodgers. That's a No. 1 starter and a brain trust gone from a team playing in a stadium no one likes, a team that couldn't afford big free agents even if it could attract them, and a team with little apparent appeal within its region.

But the Rays are back on top this year, leading the American League East and, incidentally, contending hard in the First Division. The question of the day: How do the Rays do it?

We don't have the answers, but here are three aspects of the Rays that we like, and which might, at least, pass for clues:

1. The pitching coach. About 10 years ago, it seemed as though FOX Sports was on a mission to make a media star of Jim Hickey, the Houston Astros pitching coach back then. Some of us got kind of tired of looking at him, and, anyway, who couldn't coach that pitching staff? The Astros has Roger Clemens, Andy Pettitte and Brad Lidge, among others.

Hickey became Tampa Bay's pitching coach in 2007. The Rays don't have guys like Clemens, Pettitte and Lidge this year. They don't even have Price or James Shields. But, according to baseball-reference.com through June 24, they have the best ERA (3.28) and the best ERA-plus (121) in the American League, and they've thrown the second-most strikeouts (617).

By the way, the Rays are doing it right now with Matt Moore, Alex Cobb, Drew Smyly and Jake Odorizzi – all of whom would be in this rotation if they were healthy – making a total of 15 starts this season. Put those four healthy with Chris Archer and you've got an enviable rotation.

Jim Hickey can get it done without Clemens, Pettitte, Lidge, Price, Shields or any stars. This man can coach up a pitching staff. And he might be Reason No. 1 why the Rays are where they are.

2. Strong defense up the middle. So many teams under-estimate the importance of having guys who know how to defend behind the plate, at second base, at shortstop and center field. But if you're looking for a cost-effective improvement with under-valued skills – let's just say the whole world has caught up to on-base percentage by now. Strong defense up the middle is another matter.

The Rays are paying catcher Rene Rivera, second baseman Logan Forsythe, shortstop Asdrubal Cabrera and center fielder Kevin Kiermaier a combined $10.3 million this season – $7.5 million of it for Cabrera, who they signed this year as a free agent. By the count of baseball-reference.com through June 24, they combined for 3.0 defensive WAR. All of these players are plus defenders through their Major League careers.

3. Prime-aged players. Maddon made a fascinating remark when the Rays signed James Loney as a free agent before the 2013 season. It's safe to say that Loney's previous two franchises, the Dodgers and the Boston Red Sox, did not engage the Rays in a bidding war. But the Rays were glad to sign him, and Maddon noted at the time that Loney was 29, an age when a lot of players, Maddon said, start to figure it out.

Why don't the rest of us think like that? We'll see a player who's 27, 28, 29 and never made much impact in the Major Leagues, and we just suppose he's not worth the trouble because ... what? Because he's not going to have a Hall of Fame career?

We must be crazy. The Rays have it exactly right. They don't shop for Hall of Famers. But they will run a guy out there in his late twenties athletic prime so long as he can produce a little bit and not kill them fundamentally. They're happy to take his two or three good seasons, then move on. There are always a few guys lying around who are 28 or 29, just now figuring it out, and they're not expensive.

Every heard of Joey Butler? That's because he's 29 and never done anything. Until this year, when he's giving the Rays a 140 OPS-plus (.840 OPS), mostly as their designated hitter. Forsythe was a first-round pick by the San Diego Padres in 2008 and has never distinguished himself. But he's 28 now, playing a good second base and OPSing .824.

Rivera is 31, Loney is 31, Cabrera is 29, Evan Longoria is 29, David DeJesus is 35, Kiermaier is 25, Steven Souza is 26, Brandon Guyer is 29 and Jake Elmore is 28. That's the lion's share of Tampa Bays at-bats and defensive innings. It's a no-name group, and definitely not a young group. It's an experienced group and, to be sure, those experiences haven't all been glorious throughout their lives in professional baseball, but it is experience and it does matter. At the same time, it's not so much experience that the players are flat-up old.

The Rays do an awful lot well under the radar. That's why they're above everyone else in the American League East.
at June 26, 2015