By nearly every measure, the Cincinnati Reds are having a difficult season. But they remain strong in the running for promotion to the First Division in 2016 after a walk-off win in the 13th inning Wednesday night against the Detroit Tigers. 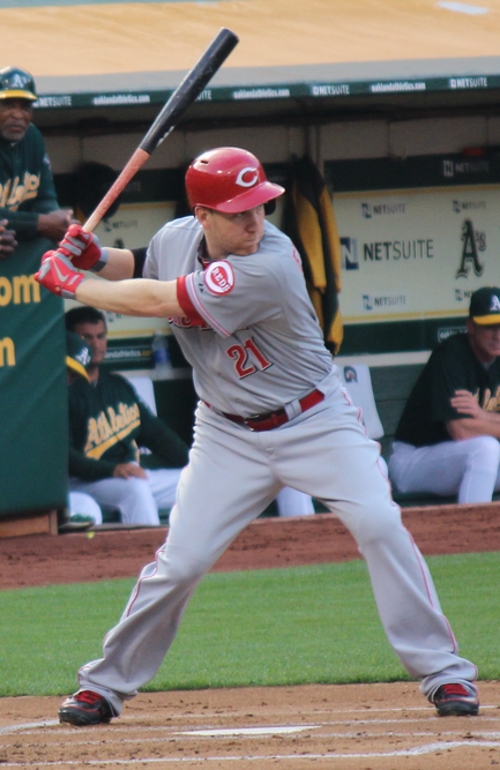 Cincinnati Reds third baseman Todd Frazier says he belongs in the All-Star Game, and it's hard to argue with him (NewJack984/Creative Commons Attribution-Share Alike 3.0 Unported license).

The last year hasn't been an especially gratifying experience for fans of the Cincinnati Reds, who have seen their favorites fall from contender at the 2014 All-Star break to dismal also-ran under the leadership of manager Bryan Price.

Price has supplied most of the drama for the Reds this year through meltdowns, which have included a profane tirade born of complete ignorance concerning the beat reporter's responsibilities, wandered through a bizarre episode in which the umpires threw him out one day during the exchange of lineups, and stumbled here and there through odd decisions about player utilization.

Only the All-Star performance of third baseman Todd Frazier and the jaw-dropping inadequacy of the Milwaukee Brewers have saved the Reds from the National League Central basement.

At the All-Star break last season, the Reds were 51-44, 1½ games out of first place in the NL Central. And they had injuries, sure, but they also rolled over in the second half, going 25-42 for the balance of the season. That dive earned the Reds a demotion from the First Division to the Second Division for 2015. When a team rolls over like that, you have to look at the manager.

But the Reds didn't, and now they're 30-35, 13 games out of first place in the NL Central division, and that's after a dramatic, 8-4 win in 13 innings at home against the Detroit Tigers Wednesday night, combined with a loss by the St. Louis Cardinals in Minnesota.

But there is hope for the Reds. As badly as this season has gone, they are in the thick of it for promotion to the First Division in 2016 with their competitive performance this season in the Second Division.

The top two Second Division teams win promotion for next year. The percentage column usually makes that determination, but if one team wins by percentage and the other wins by the games behind column, then those are the two clubs to be promoted.

The Reds have plenty of time left to earn their promotion, as the Second Division includes two other clubs — the Pittsburgh Pirates and Milwaukee Brewers — that are with them in the National League Central division.

Frazier's walk-off grand slam in the 13th inning Wednesday night gave the Reds their huge victory to keep them in the thick of the Second Division race. For the season, Frazier is batting .294 with 19 doubles, 22 homers, a .639 slugging percentage and a 1.000 OPS. On the Reds postgame television interview, Frazier said he deserves to be on the National League All-Star team. There was no cockiness about it. No coyness, either. Nor should there be.