The Houston Astros remain the first-place team in the West League, though losing the first two games of this weekend's series in Seattle might signal their decline. But if this is decline, the Astros have so much young talent right now that their decline won't last for long. 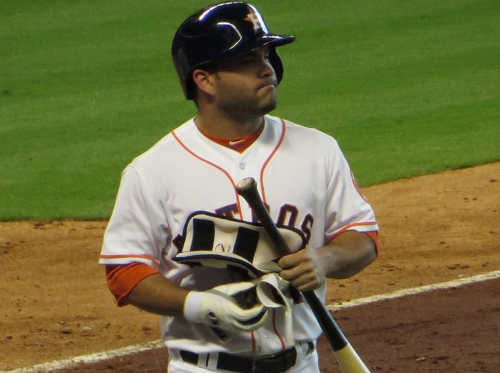 We keep waiting for the Houston Astros to falter. Perhaps that has begun to happen, but it seems unlikely so long as they're playing in the West League.

Because of that, the Astros have a 2½-game lead in the West League, even after losing the first two games of this weekend's series on the road against the Seattle Mariners. The Astros are 40-30 across their Major League schedule. A month ago, they were 27-14, so we can see that they've cooled down a bit.

The Astros lost their magic when they left the west for three weeks starting on May 21. Among their misadventures during that time was a seven-game losing streak against the Baltimore Orioles, the Toronto Blue Jays and the Chicago White Sox.

But the Astros returned to the west on June 12 and proceeded to reel off six wins in their next seven games, including a five-game winning streak entering this weekend's Seattle series. With that, the Astros have continued improving their impressive performance in the West League, which they still lead with a 28-15 record. Against clubs not in the West League, obviously, the Astros are a little more like the club we've known for the last several years, holding a 12-15 record.

The Astros have put together three winning streaks of five games or more for the first time since 2008, which was the last time they had some kind of chance at entering the playoffs. One of those winning streaks this year was a 10-game effort April 24-May 3, all against West League competition. Another of those streaks, entirely against the West League, preceded Friday night's games.

The Astros have assembled 28 multi-homer games in 2015 and won 27 of them. Of those games, 20 of them (and 19 of the wins) have come against West League opponents. The only loss came Saturday night, when the Astros hit two homers in a 6-3 loss at Seattle.

As part of their development through the last couple of years, the Astros have, naturally, played a lot of games against western clubs. Last season, which ended 70-92 overall for the Astros, saw them go 38-42 against teams now in the West League. A year earlier, when the Astros bottomed out at 51-111, they were 28-52 against West League clubs (23-59 against everyone else).

Leading the AL West at this point in the season is nothing remarkable, of course. It would be remarkable if the Astros are there at the end of the year. One never knows until later, but could it be that this weekend's series in Seattle is a sign that the season is flipping for both clubs?

Whatever is the case, it's already remarkable to behold the sheer volume of young talent the Astros are bringing into their big league operation just during the last two seasons.

Last April, the Astros brought up outfielder George Springer, the 11th overall draft pick in 2011. In his first 130 big league games, Springer is a solid 130 OPS-plus hitter. At the trade deadline last year, they brought in Jake Marisnick from the Miami Marlins, so they now have a 24-year-old center fielder who is struggling a bit at the plate, but he's a plus defender (0.4 defensive WAR, per baseball-reference.com) and he's 11-for-15 in stolen base attempts.

On June 8, the Astros promoted shortstop Carlos Correa, the first overall pick in the 2012 draft. In his first 10 games, Correa notched 15 hits, the most hits within 10 Major League games in club history. Correa reached base safely in each of those games, which included three multi-hit games. Correa stole three bases Thursday in an 8-4 win at Colorado, becoming, at 20 years and 269 days, the third-youngest player in Major League history to steal three bases in a game — behind Rickey Henderson and Ty Cobb!

And two other players from that 2012 Astros draft preceded Correa to the big league club. Outfielder Preston Tucker, taken in the seventh round in 2012, is a powerful 24-year-old switch hitter with an OPS-plus of 126. The club selected his little brother, Kyle Tucker, fifth overall just now in the June draft. Then, there's 21-year-old right-handed starter Lance McCullers, the 41st overall pick in 2012. In his first six Major League starts this year, covering 36 innings, he struck out 40 hitters.

Before all of that, of course, the Astros already had All-Star second baseman Jose Altuve, reliable catcher Jason Castro and pitching ace Dallas Keuchel.

Quite a fascinating club. The Astros probably aren't as good right now as their performance in the West League would have us believe. Before long, though, they're likely to be better.