The Angels broke out their bats during the July 4 weekend in Arlington, scoring 33 runs in a three-game sweep of the Texas Rangers. We won't say for sure that the Angels players were glad to see general manager Jerry Dipoto go, but we're pretty sure they weren't upset to see him leave. 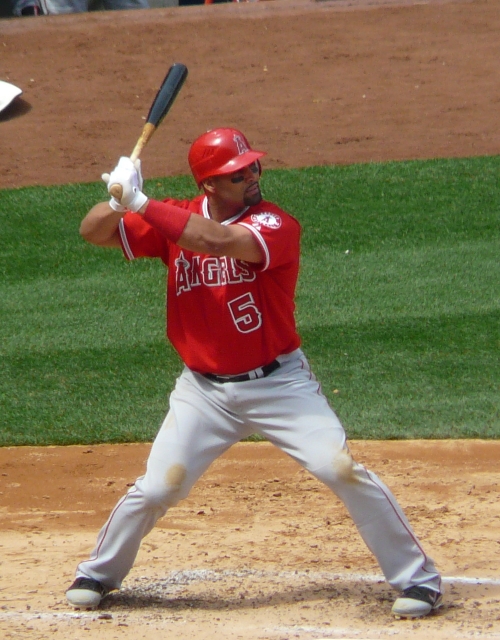 We prefer to do things the hard way, so we're going in that direction. An air clearing like this isn't the worst that can happen with a baseball club that's really been flat-lining all season, just winning a couple and then losing a couple, ad nauseum, all the way from the start of April until now.

Not a bad idea to roll a head or two under the circumstances, and Dipoto ended up rolling his own.

In a short run of games since Dipoto gave way on July 1, the Angels have performed well, demolishing the Texas Rangers three straight in Arlington during the July 4 weekend by a combined score of 33-8.

Incidentally, the three-game sweep gave the Angels possession of the Harmon Killebrew Award
and the Henry Aaron Award.

It's easy to say Dipoto's departure must have made the Angels bats happy, at least immediately. How this plays out in the long term is anyone's guess, though it's hard by now to believe the players were thrilled with their former general manager.

One can imagine how it went over with the players when the guy in the polo shirt – the guy who didn't provide a lead-off hitter, or a clean-up hitter, or even a No. 6 hitter, the guy who traded away the old second baseman and didn't replace him, the guy who worked harder at poor-mouthing Josh Hamilton than at replacing him – when that guy went into the clubhouse and told players that the real problem was that the coaches weren't giving them good enough information. One can imagine.

But we don't have to imagine, because the reports tell us that what happened is what we would imagine. At least we know now who's the boss, and it isn't Mike Scioscia, the 15-year manager who's still under contract through 2018 at $6 million per year. Scioscia won the power struggle with Dipoto when Hall-of-Fame-bound first baseman Albert Pujols got his back. When the GM enters the clubhouse to run a meeting with the players and the most expensive and accomplished player on the team basically tells him to do his own job better, it's over.

Compare the situation with what happened last year in Oakland. Reports say a huge conflict arose between their general manager, Billy Beane, and their best player, Josh Donaldson, with manager Bob Melvin in the middle. After the season, Beane traded Donaldson to the Toronto Blue Jays. Beane has said the conflict did not motivate the trade, and it doesn't even matter. The Athletics will never be so invested in a player that Beane can't trade him for any reason he wants.

By the reports, Dipoto was dissatisfied at how basic scouting information was filtering through the coaching staff to the players. By the reports, Pujols told Dipoto that the roster this year just isn't as good as the roster last year.

We can't judge if Dipoto was right, but we definitely can judge that Pujols was right. The most obvious problem is a dreadful lack of depth in the batting order. When your lineup has Pujols and Mike Trout, but you still have one of the worst offensive teams in the Major Leagues, that's almost an achievement. Even after their hitting explosion in Texas, the Rangers still are 11th of 15 American League teams at 4.10 runs per game.

One doesn't have to be a player to see that the front office has failed his team. Time will tell, for example, if young left-hander Andrew Heaney is ultimately a good return for popular and productive second baseman Howie Kendrick. So far, though, time is saying the Angels are significantly downgraded at second base.

In so many ways, the Angels front office performed terribly throughout the Josh Hamilton saga. When you commit $125 million to a known and admitted drug addict, a constructive approach to a relapse has to be part of the equation. But the Angels didn't see it that way, because they never thought they were committed to $125 million. They thought Hamilton's drug problem would get him suspended without pay, the way performing enhancing drugs (PEDs) are, and that they could weasel out of his contract if he relapsed. When they learned otherwise, they were petulant and indignant.

We don't suppose for one second that Moreno's chaotic leadership isn't behind all of this, but Dipoto got in front of the microphones and played the heavy, and that couldn't have gone over well with players who are sympathetic to Hamilton. The Angels management reacted to Hamilton's problems with outrage, as if a drug addict's relapse somehow defied the moral and physical laws of the universe.

The Angels already knew Hamilton would miss the start of the season with shoulder trouble, even before we all learned of his relapse. Yet, they did next to nothing – they signed Matt Joyce – to account for Hamilton's absence in left field and the middle of the batting order. The problem isn't that the Angels don't have Hamilton, who OPS-plussed 114 last season. They can replace that with someone about as good as Juan Rivera used to be. The problem is that they don't have anybody.

So, the Angels figured all along that they would be rid of Hamilton's contract with a relapse, they rooted openly for him to be suspended because of the relapse, when they didn't get their way they sent Hamilton back to the Rangers for almost nothing and, all this time, they didn't make a serious bid to replace him. And they have a big whole in their lineup now because of it.

One day a couple of weeks ago, the general manager entered the players quarters and told them he was going around the field manager to fix the club's mediocre performance. If you're a player on that team, maybe the general manager can go to hell. The Angels happen to have a player who can tell him that.

We're not saying Pujols told Dipoto where to go. All we know is that Dipoto went somewhere.