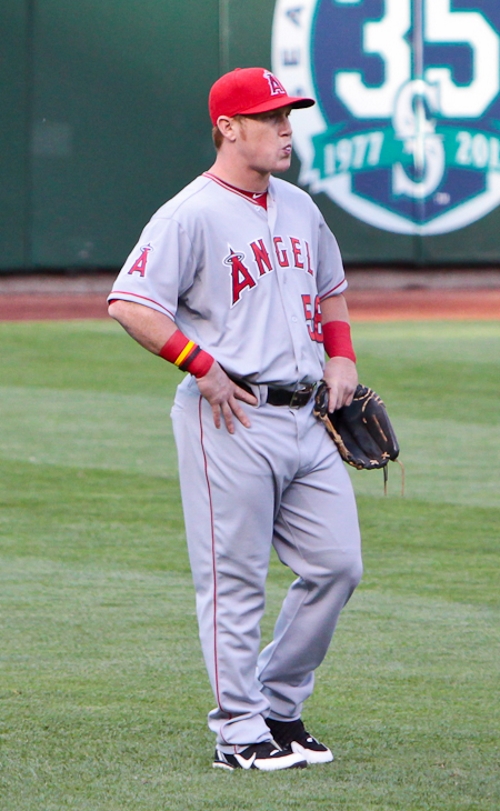 Kole Calhoun has performed quite well for the Angels this year leading off, and not as well batting clean-up (Dave Sizer [UC International crop]/Creative Commons Attribution 2.0 Generic license).

Let's go through the Angels' batting order, using numbers from baseball-reference.com to illustrate how easy it must be for opposing pitchers to work this lineup. All numbers account for games through July 1, the day Jerry Dipoto stepped down as general manager and was replaced by Bill Stoneman.

The bottom-line takeaway is this: In two-thirds of the positions in the batting order, the Angels are in the bottom two-thirds of production across the Major Leagues, based on OPS. Any place where Mike Trout or Albert Pujols bat, the Angels will be strong, Johnny Giavotella gave them more in the No. 9 spot than most clubs are getting, and though Kole Calhoun might not be your ideal leadoff hitter, he's not bad there, either.

But the offensive talent in the midsection of this order is so thin that manager Mike Scioscia has tried papering it over by mixing in Calhoun, which hasn't worked out, then replacing Calhoun at the top with Giovatella, and that hasn't worked, either.

Anybody watching this team knows the Angels would be considerably improved if they can find someone to stick in left field who can catch the ball and produce something offensively. He doesn't have to be a multi-dimensional threat offensively, but he has to do something – either get on base from the top of the order or drive the ball from the middle. Ideally, he's someone who enables you to put the best hitters, Trout and Pujols at No. 2 and No. 3.

Remember when guys like Juan Pierre and Kenny Lofton were floating the game around looking for work? Someone like that would be just about right. Through the July 4 weekend, Marlon Byrd is batting .245 (108 OPS-plus) with 14 homers for the Cincinnati Reds. He might be available and he probably would help. The Angels also have reportedly been in trade talks with the Milwaukee Brewers for Gerardo Parra, who also would be an upgrade. The Angels don't need a star, but they do need a threat.

Anyway, here's how the Angels were performing in all of the positions in the batting order, one through nine, compared with the other 29 Major League clubs through July 1.

Leading off, the Angels have a .619 OPS, 29th out of 30 Major League teams. The most frequent lead-off hitters have been Erick Aybar (35 games) and Cole Kalhoun (28 games). Calhoun began the season as the lead-off hitter, and actually was pretty good in the batter's box – .306 batting average with an .806 OPS. But he doesn't exactly fly around the bases and Scioscia can't put the game in motion the way he'd like with Calhoun batting in front of Trout and Pujols. With those two hitting behind him, Calhoun still scored only 14 runs in 28 games leading off.

Additionally, the Angels needed support down the order, and a line-drive machine like Calhoun stands to be useful that way. Last year, the Angels most frequently had Hamilton batting fourth, Howie Kendrick fifth, Aybar sixth and David Freese seventh. This year's middle order, as we shall see, is not nearly so strong.

By mid-May, Scioscia dropped Calhoun down the order – to fourth through mid-June and to second from mid-June to now – moving Aybar to the top. Aybar's energy is one of this team's most valuable qualities, and he has been a decent lead-off hitter at times during his career. But he's batting only .206 from the top spot this season. Historically, Aybar is better the more you can drop him down the order. Aybar is back now to batting fifth or sixth and the most frequent lead-off hitter for the last two weeks is Giavotella, who is batting .196 with nine hits and three walks in 51 plate appearances from the top spot.

At No. 2, the Angels are fourth across the big leagues with an .853 OPS because the guy there has mostly been Trout. Nothing more needs to be said about him. In the last couple weeks, though, the Angels have dropped Trout from second to third and Pujols from third to fourth, placing Calhoun in the two hole. Calhoun has struggled there, batting .200 (12 for 60) as the No. 2 hitter.

At No. 3, again, the Angels are riding high – third across the game with a .923 OPS, behind only the Arizona Diamondbacks (Paul Goldschmidt) and the Detroit Tigers (Miguel Cabrera). The spot has belonged to Pujols, then Trout. No problem.

At the clean-up spot, we start seeing big problems. The Angels have a .686 OPS from their clean-up hitters, 27th across the Major Leagues. By the way, that's with Pujols kicking in a 1.001 OPS in 15 games from that spot, which has been his alone since June 15. Pujols is, however, batting only .223 (11 for 50) cleaning up, though with six homers. Before Pujols, it was Calhoun, who OPSed .689 as the cleanup hitter. Before Calhoun, it was even worse – a combination of Freese (clean-up OPS .691) and Matt Joyce (clean-up OPS .344).

At No. 6, the Angels OPS .651, 23rd in the Major Leagues. They actually have a couple of players who have succeeded a little there. Joyce is hitting only .227 in 106 plate appearances from the six hole, but he has walked 15 times, so he has a .352 on-base percentage. Freese has been there for the last couple of days and has six hits in 19 at-bats hitting sixth this season. The Angels have run a dozen other guys to the six hole this year. Between them, they have 195 plate appearances with 41 hits, 14 walks, no homers and 13 RBI.

The Angels have good news at No. 9, where their .608 OPS is seventh in the Major Leagues. Giavotella was batting .311 with a .789 OPS from the bottom position, but he was moved to the top of the order and the Angels have no one else who has distinguished himself as the ninth hitter. Naturally, the top 14 teams are American League teams. The Seattle Mariners, 17th at .509, are the only AL team in the bottom half of the Major Leagues, trailing the New York Mets and Philadelphia Phillies.