Just going by the regular season histories, the Angels are the most successful expansion franchise in  Major League Baseball, being the only expansion franchise with a winning record through its entire life. The Angels went over. 500 in July 2014 and they have kept winning. 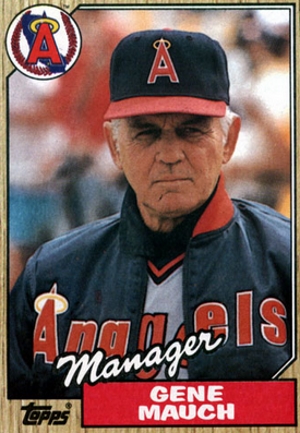 Gene Mauch won two division managing the Angels before their golden age of the 21st century (Topps baseball card. It is believed this low resolution, cropped and watermarked image of a poster to identify the subject of this story is fair use in the absence of a public domain image of the subject.).

It's worthwhile to note a unique anniversary that passed last month for the Angels.

A year ago on July 10, the Angels became the first and only expansion team across the Major Leagues to achieve a winning record historically. The Angels went over the top for good (so far) with a 15-6 win against the Texas Rangers in Arlington that night, bringing their all-time record up to 4274-4273-3. Since then, the Angels are 99-71, bringing themselves up to 4,373-4,347 all-time entering games of August 1 (all numbers in this piece are from Baseball-reference.com).

Out of 30 Major League franchises, 13 are breaking even or better historically in regular season games. Of those 13, 12 are original "modern era" franchises, meaning they go back at least to the founding of the American League in 1901.

Presumably, the traditional franchises would have winning records because they could fatten up on expansion teams through the years, but it hasn't always worked out that way, especially not in the American League, where three franchises lost so much before expansion that they still haven't caught up. They are the Baltimore Orioles (formerly the St. Louis Browns), the Minnesota Twins (formerly the Washington Senators) and the Oakland Athletics (formerly of Philadelphia and Kansas City), who could pretty reliably be counted upon to finish in the second division of the American League when it was said that the World Series wasn't official unless it included the New York Yankees.

Behind the Angels, the next best expansion team relative to .500 is the Toronto Blue Jays, who are 59 games short of breaking even since their debut in 1977.

Two other teams in recent years have flirted with reaching .500 historically.

The Atlanta Braves succeeded, and they now are a robust 48 games over .500 in their 140-year history, which began in 1876 as the Boston Red Stockings of Harry Wright and George Wright. The Braves were so consistently terrible through their last 50 years in Boston that they didn't reach .500 until 2012. Think about this: The Braves won 14 straight division titles from 1991 through 2005, and that still wasn't enough to break them even.

Getting to .500 wasn't easy for the Angels, either.

The Angels actually began their life with three winning seasons (and another year with 80 wins) in their first seven. But from 1968 until 2002, there wasn't a lot happening – just a couple decent clubs in the late 1970s and three good clubs in the late 1980s.

The Angels were working from way behind going to 2002 – 234 games below .500 historically. So, they have moved fast, rolling up seven seasons with 90 or more wins in the last 14 complete seasons. Unquestionably, the 21st century has been a new era for the Angels, and it has been a good one.

No problem, though, because the Angels were getting hot. An 8-7 win against the Jays on July 9 brought them back even, then the Angels went to Arlington and went over for good with their 15-6 win on July 10.

The Angels still were 3½ games behind the Oakland Athletics in the American League West at that point and they wouldn't move into first place until Aug. 16. But they held first place once they took it and finished the regular season 98-64 before losing their only playoff series to the Kansas City Royals in a three-game sweep.