The Houston Astros improved their starting rotation and their everyday lineup at the trade deadline, then started losing. In a flash, they lost a substantial West League lead and now have been overtaken on the top of those standings by the Dodgers. 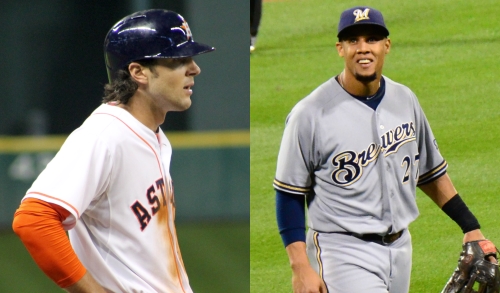 At the July 31 trading deadline, the top contenders stock up on a market for high priced talent to add the extra piece or two that should make themselves that much better.

So, the Houston Astros, sudden contenders in 2015, went to the market and picked up a lot of good stuff. A week before the deadline, they sent minor leagues Daniel Mengden and Jacob Nottingham to the Oakland Athletics for Scott Kazmir, an accomplished big league left-hander from the Houston area. On the day of the deadline, they moved minor leaguers Josh Hader, Adrian Houser and Brett Phillips, along with rookie right fielder Domingo Santana, to the Milwaukee Brewers for right-hander Mike Fiers and one of the best players in the game, center fielder Carlos Gomez. The Astros even picked up some cash in the deal to help with those contracts.

The Astros made themselves much better. They could replace light-hitting center fielder Jack Marisnick with Gomez, a Gold Glover who has averaged 24 homers and 37 steals in the last two full seasons, a 128 OPS-plus guy.

Suddenly, the pitching rotation includes Kazmir, who won 15 games in an All-Star 2014 and was even better this year, a 2.38 ERA in 18 starts for the Athletics. They also could include Fiers, who isn't terrible and has even been good, throwing a 2.13 ERA in 72 innings for the Brewers last season. That meant they could be a little cautious with young starters like Lance McCullers while lopping off mediocre veterans Roberto Hernandez and Dan Straily. By the way, the Astros also recently brought veteran Scott Feldman back from the disabled list.

So, as they've often said in Houston, all systems are go, right?

Last week, the first full week after the trade deadline, the Astros lost six of their seven games to the Texas Rangers and Oakland Athletics, neither of which are winners (though the Rangers, partly due to sweeping three from the Astros, are up to .500). They lost again Tuesday night to the San Francisco Giants. It's true that all those games were on the road, as is their game Wednesday against the Giants.

But this isn't the plan.

Through July 30, the Astros built their lead in the American League West by two over the Angels by sweeping them three in Houston. In addition, not incidentally, the Astros were 35-18 in the West League, holding a 3 1/2 game lead over the Dodgers.

All of that is gone now. The Dodgers, whose only West League action since July 30 is a three-game sweep of the Angels at Dodger Stadium last weekend, now have taken a one-half game lead over the Astros in the West League. And the Angels have cut their deficit to one game in the AL West despite a 4-6 August.

So, the Astros laid some good plans, but they aren't working immediately.

Kazmir, for his part, has been sensational for the Astros, allowing one earned run in his first three starts (20 1/3 innings) for them. Fiers took his first start for the Astros Sunday in Oakland and allowed only a run in 6 2/3 innings. The Astros wound up losing, 5-4. Not his fault.

In fact, the Astros pitching for the last 11 days has been about the same as the rest of the season, an ERA right around 3.50 (the American League average was 3.92).

But their hitting seems to have taken a respite. Right off the trade deadline, the Astros had a couple games in which they scored nine runs. One of those games, they actually lost, a 12-9 decision to the Rangers on Aug. 3. In their next seven games, the Astros fashioned a team batting average of .188, along with an on-base percentage of .263. The Astros scored a total of 18 runs in those games, even though they hit five homers.

And the Astros do need that. The Astros entered Wednesday's games with 500 runs, fourth in the Major Leagues, 4.05 runs per game. In the last week, though, they've averaged fewer than three runs per game.

They're not going to win that way. And if they don't win, then those acquisitions were for naught.