The Henry Aaron Award and David Dombrowski arrived in Boston right at the same. With Dombrowski taking over as President of Baseball Operations for the Red Sox, the hub club has popped up with enough unlikely heroics to mount a second Aaron defense, and against the Kansas City Royals, even. 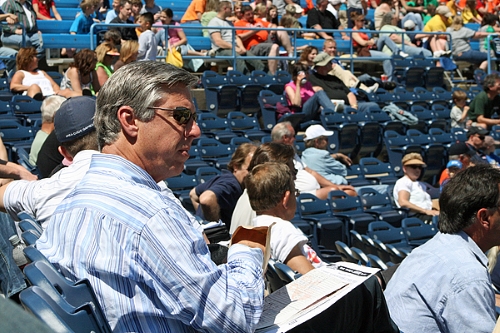 New Boston Red Sox baseball chief David Dombrowski doesn't have to like everything he's seeing from his club this week, but he has to be liking the wins (Cathleen Carrigan/Creative Commons Attribution-Share Alike 2.0 Generic license).

As it happens, the Boston Red Sox began a defense of the Henry Aaron Award on Monday, and David Dombrowski arrived in Boston a day later.

Not to say that prosperity comes in pairs, but the Red Sox made their first successful defense of the Aaron right as Dombrowski took the reigns as their President of Baseball Operations. Coincidence? You decide. (Hint: it is.)

Coincidence or not, it's still the high point of a disappointing Red Sox season. By the accounts, Ben Cherrington did everything as well as he could and as right as he could as the club's general manager before stepping down right after the Dombrowski hire. However, bringing Hanley Ramirez as the left fielder and Pablo Sandoval as the third baseman to a team playing half of its games in Fenway Park looked like a bad fit on paper, and it looks even worse on the field.

Even worse than that, though, is the Red Sox pitching staff. The Red Sox have one pitcher on the roster right now with any kind of achievement this season, reliever Koji Uehara. As a staff, the Red Sox entered Friday's games with a 4.59 ERA, nearly two-thirds of a run higher than the American League ERA of 3.94.

In their 121 games entering Friday, the Red Sox allowed 592 runs. If they had just a league average pitching staff/defense, they would have allowed 508 runs in those games and the team's Pythagorean expectation would be 63-58 instead of 56-65 (the Red Sox actually were 55-66). At 63-58, the Red Sox would be tied with the Angels for the second American League wildcard.

So, pitching has killed the Red Sox, and we can be sure that having Sandoval and Ramirez defend the left side against the opposing right-handed lineups recommended by Fenway Park hasn't helped.

The Tigers won the American League Central four consecutive times before this season. This year, three circumstances overtook them.

First, the Kansas City Royals. Second, the Tigers, in effect, and by various causes, lost big-time starting pitchers Max Scherzer and Justin Verlander this year, and replaced them with only one, David Price, acquired at the trade deadline last year. So, the Tigers needed to replace a 10-games-over-.500 starting pitcher. If all you've got in replacement is a 10-games-under-.500 pitcher, that's costing your club 20 games. If all you've got is a .500 pitcher, that's still 10 games. So (and third), the Tigers were looking for that top pitcher at the trade deadline and, when they saw what the Royals gave for Johnny Cueto, they knew they couldn't play in that market.

Dombrowski then recommended the sensible course to Illitch. Punt. You can't expect to score a touchdown every time you have the ball. When you have that bad year, you have to salvage it. And the Tigers did, particularly in their subsequent trade of Price to the Toronto Blue Jays.

Everyone knows Illitch wants to win the World Series before he dies, and he's 86, so he doesn't have forever. But it does seem that showing Dombrowski the door for this one poor season is a tad impulsive. Illitch might complain that when you look at the Royals doing what they're doing with a $113.6 million payroll, then the Tigers have plenty enough resources to win with their payroll of $173.8 million. But would an 86-year-old Illitch put up with the losing Kansas City has endured to develop its less expensive contender?

Anyway, Dombrowski never particularly had to worry about money with the Tigers, and that's not going to be a problem for him in Boston, either.

Right now, his problem is pitching. And left-side defense.

But those problems haven't slowed the Red Sox on this present run with the Henry Aaron Award, which began when they took two-of-three from the Seattle Mariners at Fenway Park Aug. 14-16 to capture the prize.

The Red Sox put the Aaron on the line against the visiting Cleveland Indians in a three-game set that started Monday with a 8-2 loss. The next day, though, the Red Sox introduced Dombrowski, the immortals Mookie Betts, Brock Holt and Blake Swihart each drove in two or more runs and Eduardo Rodriguez pitched an uncharacteristic good game (eight innings, one run) in a 9-1 victory. Then, the Red Sox won the rubber game on Wednesday, 6-4. The key was a four-run fourth inning featuring a three-run homer by Jackie Bradley, Jr., and a solo blast by Ryan Hanigan.

If you don't see the Red Sox' future in all of those names, you're probably not alone. Then again, they were playing the Indians.

But now the Red Sox have won the first two of a four-game series in Fenway against the Royals, enough to defend it once again.

Thursday, the Red Sox took the opener from the Royals, 4-1. The six, seven and eight hitters (Travis Shaw, Hanigan and Bradley) drove in all the runs and Lefty Wade Miley horsed up with 7 1/3 innings, allowing only one run.

The Red Sox won again Friday, 7-2, roughing up Cueto with 13 hits in six innings. The bottom four Red Sox hitters (Rusney Castillo, Shaw, Swihart and Josh Rutledge) scored all the runs and drove in four of them.

In the last two days, then, the Red Sox won when their mediocre pitchers put up good games and their low-order hitters beat up Corey Kluber and Cueto. Probably not the formula the Red Sox can count upon long-term, but it's good for now, and it is bringing the Red Sox their best moments of this season.

Assuming the Red Sox hang on in this title defense, that will bring them up to two defenses and assure them of more than 10 games holding the title.

Can they make a run with it and challenge the Dodgers on top of the standings?

At this point, they've got nothing better to do.

2015 Henry Aaron Award results
(There is no tiebreaker for the Aaron. The champion keeps it unless the challenger wins outright. However, the runs are given for series ending in ties).