The San Francisco Giants and St. Louis Cardinals are right next to each other on top of the First Division standings, separated by 10 percentage points through Tuesday's games. They will meet five more times in little more than the next week, and the championship is likely to ride on those games. 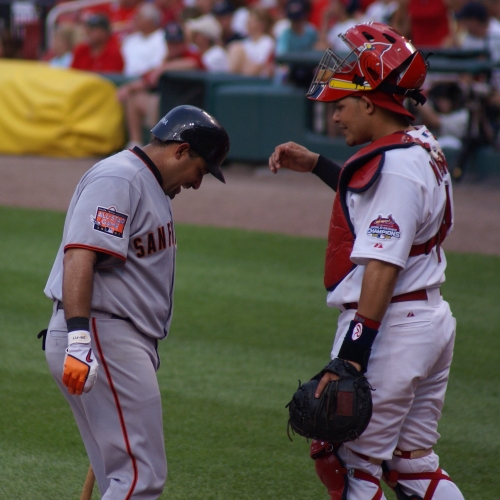 St. Louis Cardinals catcher Yadier Molina, right, delivered a big home run for the Cardinals against the San Francisco Giants Tuesday night. Here he is with his brother, Benji Molina, during a 2007 meeting between the Cardinals and Giants (shgmom56/Creative Commons Attribution-Share Alike 2.0 Generic license).

The First Division race will go into hyper-drive in the next 10 days, which feature the only seven games this season between the San Francisco Giants and the St. Louis Cardinals, the two front-running teams in the top tier.

If the first two of these meetings are any indication, this stretch of the race will be memorable.

The Cardinals won the opener in St. Louis Monday night, 2-1, on a solo homer for Yadier Molina and an eighth-inning scratch run that scored on an infield out by Mark Reynolds. The Giants prevailed, 2-0, in the second game, thanking an RBI double by Brandon Crawford, a hit batsman with the bases loaded, six shutout innings for Madison Bumgarner and a stiff bullpen.

The Giants improved to 21-10 (.677) in the First Division, while the Cardinals fell to 10-5 (.667). It is winning percentage that will decide this, so, even if the Giants have a three-game lead, that matters little.

In the First Division, their histories are rather like that.

The Cardinals are the only team that has been in the First Division every year since these standings were first kept in 2010. But the Cardinals never even came close to winning it until last year, when they fell short at the end.

So, it's wildly fluctuating ups and downs for the Giants, while the Cardinals have been steady and consistently excellent, without the peaks and pits that are well known to the Giants.

The Giants went a long way towards whittling down the First Division race last week, winning four straight from the Washington Nationals right after the Nationals lost two of three to the Dodgers at Dodger Stadium. With that tailspin, the Natties fell from contention and now are 17-18 in the top division.

The only other club in the mix for the First Division fight is the Tampa Bay Rays (17-10, .630), who are two games down the the Giants in the games column. But the Rays have only six games left in the First Division, all against the Toronto Blue Jays during the final week of the season.