The Dodgers improved their status in the First Division during the weekend, but at the expense of the Angels. The Dodgers swept three games from the Orange County club, pushing themselves slightly out of the relegation zone while the Angels fell to last place in the top tier. 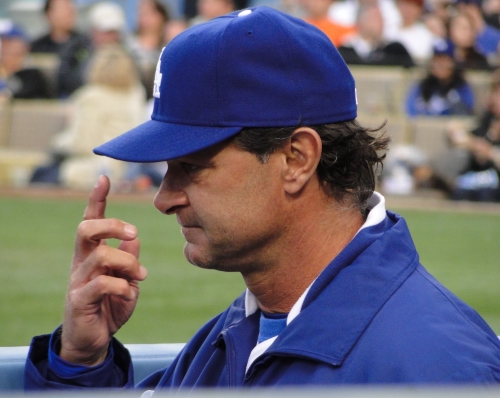 Don Mattingly continues to do a lot right managing the Dodgers, but his club's struggle against top clubs continues to be costly in the First Division, despite a three-game sweep of the Angels during the weekend (Cbl62/Creative Commons Attribution-Share Alike 3.0 Unported license).

The First Division came to August divided into two divisions, with half of the teams seriously in the fight to win the championship and the other half desperately fighting to stave off relegation to the Second Division for 2016.

The Angels and Dodgers both are in the wrong half of that mix, and that didn't change with the Dodgers sweeping the Angels in a three-game series during the weekend at Dodger Stadium. What did change is that the Dodgers no longer are the bottom team in the top tier. The Angels have taken their place.

With those victories, the Dodgers improved to 13-18 in the First Division, barely out of the relegation zone. The Dodgers are one-half game ahead of the Atlanta Braves, who are 12-18. The only club beneath the Braves is the Angels, who are defending their First Division championship from 2014 with a 5-11 performance in 2015.

The bottom two teams in the First Division are relegated to the Second Division for 2016.

The Angels are attempting to defend their First Division title from 2014 with a light schedule, which can work, but, as this season has shown, might not. The Angels have only six games left this year in the First Division, all at home – three against the Toronto Blue Jays Aug. 21-23 and three with the Dodgers Sept. 7-9.

The Angels could escape relegation by winning a majority of those games, but that remains to be seen and it will have a lot to do with how the Dodgers, Braves and Toronto Blue Jays (10-13) play out the rest of the year. Even if the Angels win a substantial portion of those six games, four or five of them, it guarantees nothing.

The Angels have the unwelcome distinction of being the best club ever relegated from the First Division, finishing 16-18 (.474 winning percentage) in 2011 and still going down. The Minnesota Twins that year turned in the worst ever performance for a First Division club with an 11-26 record (.297).

Now the Twins are making a strong bid for a promotion to the Second Division as they lead the Third Division at 15-9, one-half game in front of the Arizona Diamondbacks (13-8). The Philadelphia Phillies (9-7) and Boston Red Sox (11-9) are the top teams in pursuit of those top two slots for a 2016 promotion.

For the Dodgers, it's a matter of being unable to hold up against the better clubs, which we have seen again and again this season. Last week, the Dodgers went to Atlanta for three games against the Braves, a First Division team which, by the lights of the Major League standings, probably are the worst club in the top tier this season. But the Braves beat the Dodgers twice.

The Dodgers don't have a lot of First Division games left, either. In addition to the three in Anaheim against the Angels, they will play three against the San Francisco Giants at home Aug. 31-Sept. 2 and four in San Francisco Sept. 28-Oct. 1.