New York Mets second baseman Wilmer Flores, all but unknown a week ago, has become a national folk hero this week, first for his public display of sadness when he thought the Mets traded him, then for beating the Washington Nationals almost by himself Friday night when it turned out the Mets didn't trade him. Flores pushed the Mets back into a tie on top of the East League. 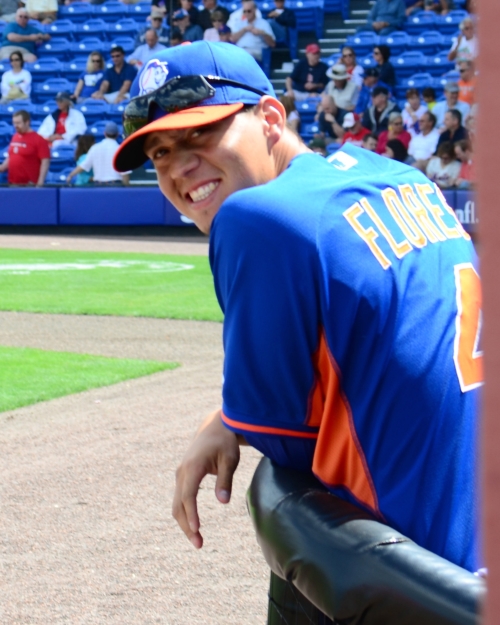 Wilmer Flores must be happier than ever that he stayed with the New York Mets (slgckgc/Creative Commons Attribution 2.0 Generic license).

First place in the East League is on the line this weekend in New York, where the Washington Nationals took a one-game lead over the New York Mets into three games at CitiField.

The Mets brought the East League back to a tie with a 2-1 win in 12 innings, punctuated by a walk-off homer for Wilmer Flores, the man who's tears filled television screens earlier this week after it had been thought he was traded to the Milwaukee Brewers in a deal that would have brought the Mets Carlos Gomez.

The television cameras caught Flores in tears Wednesday night as he stood on the field. The news had gotten around that he had been traded. In the seventh inning that night, with the Mets trailing, 7-3, Flores went to the plate and received a standing ovation from the Mets fans.

Flores entered Friday's game batting .249 with 10 homers, which doesn't make him even close to being the worst hitter the Mets send up there. But he became a sympathetic figure on the night when he really wasn't traded.

The deal fell through because, according to reports, the Mets were concerned about Gomez's health.

Subsequently, the Brewers traded Gomez to the Houston Astros and the Mets addressed their need for power hitting with a deal for outfielder Yoenis Cespedes from the Detroit Tigers.

So, Flores rose Friday night from sympathetic figure to hero, homering to win the game. Earlier, Flores made a highlight reel diving stop at second base in the top of the first inning, then he hit a two-out RBI single in the fourth inning.

Mets starting pitcher Matt Harvey went 7 1/3 innings and allowed one run, giving up five hits and striking out nine batters. Washington starter Gio Gonzalez fell to his nibbling ways, leaving with two out in the fifth despite having allowed only one run. At that point, Gonzalez had thrown 105 pitches.

The Mets victory stopped a trend during the last six weeks in which the Nationals gained 5½  games as they played a heavy schedule in the East League and the Mets played mostly outside the East. From July 18 until Friday, the Nats were 12-6 in the East, compared with 1-6 for the Mets.