The Angels and Dodgers each made helpful moves going up to the July 31 trading deadline, though neither club made big headlines across the game. The Dodgers added depth to their pitching rotation, while the Angels added veteran outifielders who will give them flexibility. 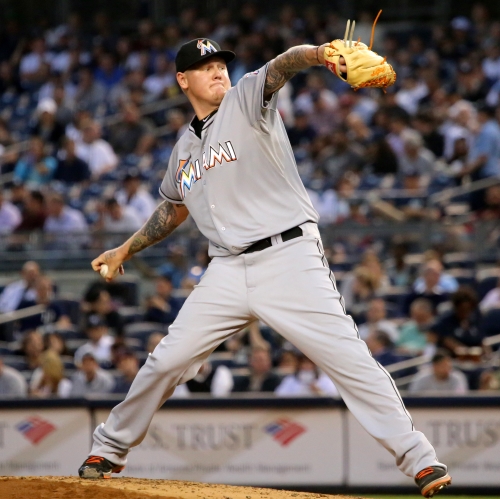 If Mat Latos gets back to being what he used to be, then the Dodgers have added a solid No. 3 starting pitcher to their rotation (Arturo Parduvila III/Creative Commons Attribution 2.0 Generic license).

The two Los Angeles clubs went to the trading deadline with very different purposes. Neither club ended up making much of a splash, though it still could be that they did what they needed to do.

The Dodgers needed help in their starting rotation because Hyun-jin Ryu and Brandon McCarthy both are down for the rest of the season. As it turned out, the price for a premium ace pitcher was too high, the Dodgers didn't want to meet it, and you really can't blame them.

The Angels just needed someone they could stick in an outfield corner without leaving a gaping hole in their batting order. A left-handed slugger like Jay Bruce from the Cincinnati Reds would have fit great, but the Angels still improved by adding a lot less and they didn't lose anything.

Probably more often than not, the team receiving prospects wins these deadline deals because the team trading for the big gun is willing to overpay for that shot at the gold, and that big gun ends up not being worth it if the gold does not arrive. Last summer, the Oakland Athletics and Detroit Tigers went all in for pitchers and neither ended up any better than the Dodgers, who wisely held on to outfielder Joc Pederson, shortstop Corey Seager and pitcher Julio Urias.

The newest update to the prospect ranking on MLB.com has Seager as the No. 2 prospect across the game and 18-year-old left-hander Urias as the No. 5 prospect. That's a strong hand for a contender in search of a pitching ace. It's also a strong hand to take into the future. We've now seen two Dodgers general managers, Ned Colletti last year and Farhan Zaidi this year, both hold their young cards.

The Dodgers ownership has said from the start that it wants to build a team from within and, for all the club's high-profile signings and acquisitions, it has held onto the young jewels. It's fun to get juiced up about the possibility of adding Cole Hamels or Johnny Cueto, but the Dodgers don't absolutely need a No. 1 or No. 2 starter and it would not repay them sufficiently to get one if it means off-loading serious prospect talent.

The Cincinnati Reds sent Cueto to the Kansas City Royals for three hard-throwing left-handers – Brandon Finnegan, John Lamb and Cody Reed – all of whom are advanced at least to Class AA and putting up good numbers this season. Later, the Philadelphia Phillies sent ace left-hander Hamels and reliever Jake Diekman to the Texas Rangers for a package of five prospects and veteran left-hander Matt Harrison. Three of the prospects – pitcher Jake Thompson, catcher Jorge Alfaro and outfielder Nick Williams – all are at least in the top 75 prospects on at least one of the major lists (Baseball America, MLB.com and BaseballProspectus.com). Later still, the Detroit Tigers moved ace lefty David Price to the Toronto Blue Jays for three pitching prospects, including Daniel Norris, who is a Top 20 prospect across the game.

It appears that nothing short of Seager and/or Urias was going to bring back one of those three ace pitchers to the Dodgers, who were unwilling to make that move. So, the Dodgers did what they could do with what they were willing to offer, and it wasn't bad. The big deal was the three-way trade with the Atlanta Braves and Miami Marlins that brought back veteran right-hander Mat Latos from Miami and left-hander Alex Wood from Atlanta.

Latos has battled injuries for the last couple of seasons, but he recently returned from the disabled list and gave up six earned runs in 26 innings over his last four starts (2.08 ERA), allowing 17 hits while striking out 23. Wood isn't the most stylish left-hander we'll ever see, but he's 24, he's cost controlled through 2019, he has a 3.10 career ERA in 369 innings and he threw two quality starts at the Dodgers this year (four earned runs, 13 2/3 innings, 2.63 ERA).

The Dodgers also brought back quite a lot else. From the Braves, they added Jim Johnson, the former Baltimore Orioles closer who bounced back from hard times with a 2.25 ERA for the Braves this season, as well as Luis Avilan, a solid left-handed reliever in his age 25 season.

In addition, they hauled in Jose Peraza, a 21-year-old shortstop counted as a Top 100 prospect preseason by all the major rankings. Peraza batted .294 in the International League this season. He hasn't walked much, but he also has been three to six years younger than the leagues the Braves have put him in for the last three years. In the very same trade, the Dodgers picked up veteran right-handed power hitter Michael Morse, who they flipped to the Pittsburgh Pirates for outfielder Jose Tabata. Once a big prospect for the Pirates, Tabata has never made it happen, but he's 26, so wait and see.

For all that, the Dodgers didn't give up anything they stand to miss. Left-handed reliever Paco Rodriguez hasn't been able to find his way onto the big league roster with any consistency. The Dodgers made big news by signing Cuban infielder Hector Olivera last winter, but he's 30 and hasn't been anywhere near making the big league club. Along with sending those two to the Braves, the Dodgers dealt three minor league pitchers of little distinction to Miami – Kevin Guzman, Jeff Brigham and Victor Araujo.

Really not bad, and maybe even pretty good. The Dodgers improved their starting rotation from both sides, they improved their bullpen from both sides, and they added a good shortstop prospect, plus Tabata. The only question is whether they will end up missing Rodriguez, Olivera or the three minor league pitchers. Might end up giving the Dodgers an "A" for that trade.

The Angels couldn't find a huge bat, but they brought in some veteran flexibility for their outfield and now it's a matter of how manager Mike Scioscia mixes and matches them. For 34-year-old Shane Victorino from the Boston Red Sox, the Angels paid infielder Josh Rutledge, who lost his spring bid for second base in Anaheim to Johnny Giavotella. For 35-year-old David DeJesus, a left-handed hitter from the Tampa Bay Rays, the Angels dealt right-handed pitcher Eduar Lopez, a 20-year-old in the Pioneer League. For 33-year-old outfielder David Murphy, another left-handed hitter, the Angels sent light-hitting Class AA shortstop Eric Stamets to the Cleveland Indians.

None of these veteran outfielders will blow the lid off of Angel Stadium, but they can take turns and keep the line moving often enough to help the Angels score.

On the whole, the Angels and Dodgers made solid moves that improve their clubs immediately at little or no cost to their future prospects. That's about as much as you would reasonably hope to do at the trading deadline.