Josh Hamilton hit a two-run homer for the Texas Rangers Sunday, giving his club a 2-1 win against the San Francisco Giants, along with retention of the Henry Aaron Award. Because the Aaron remains in the American League, the Dodgers are safe with their lead in the Henry Aaron standings. 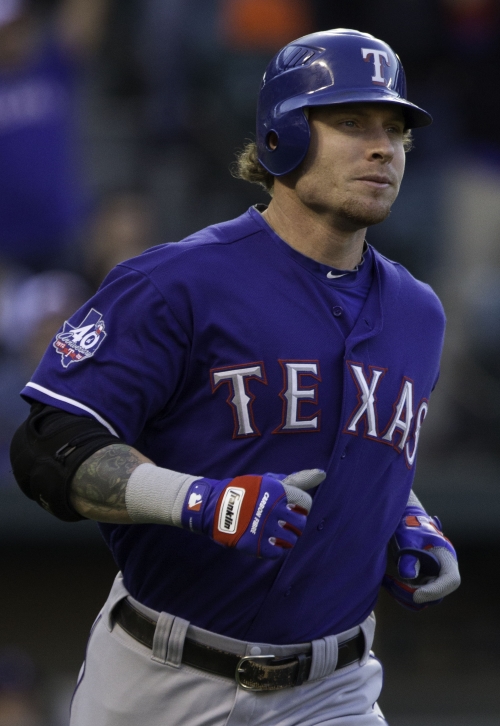 The Dodgers are a long way past dodging trollies, but they did dodge a bullet Sunday, when the Texas Rangers took down the San Francisco Giants, 2-1, to keep the Henry Aaron Award.

With a win in that game, the Giants would have captured the series and the Aaron, setting themselves up for a chance to surpass the Dodgers on top of the standings for the interleague traveling trophy.

Instead, the Dodgers remain the top club in the Aaron, and they stand to remain that way for some time, especially with the Aaron now living in the American League.

The Giants remain second to the Dodgers in the Henry Aaron standings this season, though the Giants have played nine times this season for the award, breaking their tie at eight with the Dodgers. The Dodgers still have the better overall performance, going 15-10 in Aaron games with one title, six defenses in seven attempts and 22 games holding the title. The Giants are 14-14 with one title, four defenses in six attempts and 18 games holding the title.

Not incidentally, the Angels have made a strong run with the Aaron since the start of July. After taking the Aaron in a three-game sweep of the Rangers July 3-5 in Arlington, the Angels ripped through four strong title defenses before the Rangers took it back from them by winning two of three last weekend in Anaheim. However, the Angels did a lot with their run, going 14-5 with four title defenses in five attempts and holding the prize for 16 days to reach the thick of the standings in their only turn this season with the interleague traveling trophy.

Josh Hamilton may be a pox on the Angels, but he is a hero today for the Dodgers after hitting a two-run homer in the sixth inning Sunday to give the Rangers their deciding victory over the Giants. Hamilton hit the bomb against right-hander Mike Leake, acquired by the Giants from the Cincinnati Reds in a deadline deal earlier in the week.

The Rangers are defending the Aaron Monday through Wednesday at home against the Houston Astros, who, for all their resurgence this season, have been no factor in the Aaron or Dick Allen Awards.

It remains that the Rangers lag in the Henry Aaron standings, though their two titles this year are the most for any club. They need a couple more weeks of title defenses before they're pushing on the Dodgers.