One might protest that the Bud Selig East is an arbitary sampling of teams and that its champion is rather a fluke because of it. But how does that differ from how the Major League Baseball regular season is structured to decide which clubs go to the playoffs? 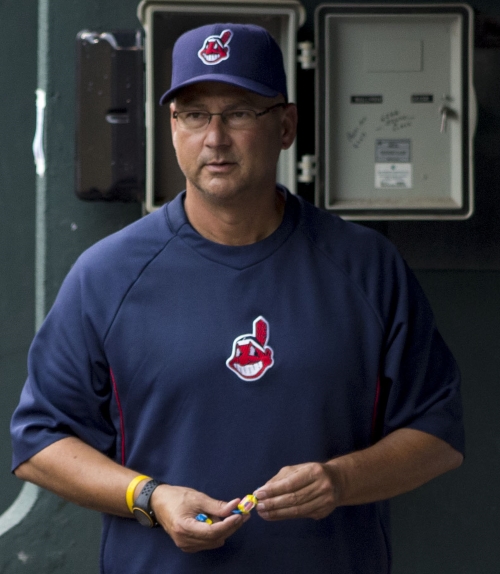 Terry Francona, the most successful manager in the history of the Bud Selig East, is trying to pilot the Cleveland Indians to their third straight championship (Keith Allison/Creative Commons Attribution-Share Alike 2.0 Generic license).

To begin, we note that the Cleveland Indians, as poorly as they've gone this season, still are making a strong bid to win the Bud Selig East for the third consecutive year.

They happened to lose a tough one Monday afternoon to the Chicago Cubs, who prevailed on a homer by Kris Bryant in the bottom of the ninth for a 2-1 win at Wrigley Field. The Cubs now are 44-31 in the Bud Selig East, with the Indians 3½ games down at 38-32.

Two questions might immediately arise. Both are reasonable. The first would be, "So, what?" The second would be, "In what kind of a league are the Cleveland Indians 38-32?" In the real American League standings, the Indians began Tuesday's games 58-66. That means they are really terrible, 20-34, playing outside of the Bud Selig East.

The second question is more interesting, because it says something about how the competitive integrity of the Major League Baseball (MLB) schedule has been sacrificed since the start of interleague play back in 1997.

Quickly, Indians are 38-32 in the Bud Selig East because that's their record against opponents in the Joe Cronin and Chub Feeney Leagues, which accounts for 15 other clubs across the Major Leagues. Is it not interesting that if you just consider the Indians against a particular cross-section that includes half of the Major League clubs, they're actually pretty good?

If you have any inclination to say that the Indians' work against the unbalanced selection of clubs in its Bud Selig East record is not representative of what the Indians are, we agree. But if we agree on that, we should also agree that the MLB schedule raises the same concerns, perhaps to an even greater degree, and certainly to a more serious degree.

Ever since interleague play began, we have to live with teams fighting for playoff entry on the basis of different schedules, which is inherently unfair and which seriously damages the integrity of that competition. If your interleague opponents are poor and the team against which you are jockeying for a wildcard berth plays good interleague opponents, that is an advantage for your side.

Take a look, for example, at the race for the second wildcard in the American League. Basically, it's a scrum of .500ish clubs fighting for survival. But the American League East clubs (the Baltimore Orioles and Tampa Bay Rays) in that mix are at a huge advantage against the AL West clubs (the Angels and Texas Rangers) and the AL Central club (the Minnesota Twins) who are in that fight.

The interleague schedule is set up this year so the eastern divisions play each other, as do the central divisions and the western divisions. So, if you're in the AL East, you're playing interleague against three dreadful clubs (the Atlanta Braves, Philadelphia Phillies and Miami Marlins), a talented club that plays messy baseball (the Washington Nationals) and an underwhelming club with young and talented pitching (the New York Mets).

Three of the six worst winning percentages across MLB are in the NL East, the Nats struggle to stay even and the Mets have only recently advanced from having the worst record among the division leaders. All of that is rather an achievement when one considers that the NL East clubs play 56 percent of their games against each other.

There's not a truly good club in that whole NL East mix, and those are the clubs against whom the AL East clubs are bidding for wins and losses towards a playoff berth that will be decided by a game or two.

The Twins are playing their interleague games against two poor clubs (the Cincinnati Reds and Milwaukee Brewers), as well as an awesome and pretty lucky club in the St. Louis Cardinals, a strong club in the Pittsburgh Pirates and a club on its way to being strong in the Chicago Cubs. If you're the Twins, wouldn't you rather play the National League clubs who the Rays and Orioles are playing? Wouldn't you like your chances better that way?

The Angels and Rangers are playing interleague against the NL West, which includes one bad club (the Colorado Rockies), two decent clubs (the Arizona Diamondbacks and San Diego Padres) and two good clubs in the Dodgers (who aren't even as good as they should be) and the Giants (who have a way of getting better in the Fall).

The Orioles and, especially, the Rays are in this thing and might prevail because they have a much easier path than the Twins, Angels or Rangers. And that simply is not in the spirit of how playoff berths should be decided. Sure, the Twins could have won another game or two against the Reds and Brewers, and so forth, but the point is that the Twins, along with the Angels and Rangers, have a much tougher assignment overall to win 90 games, or whatever that number becomes to win a playoff berth.

A little further down the AL wildcard standings, we find the Detroit Tigers (59-65), Chicago White Sox (58-65) and the Indians (58-66). How many of these clubs would be matching the Rays and Orioles at .500 if they played the Braves, Phillies and Marlins instead of the Cardinals, Pirates and Cubs? Could be all of them.

One might suppose that the Twins are at an advantage against the Rays and Orioles because they play a lot of games in the AL Central against the Tigers, White Sox and Indians. But as the point just made shows, that's somewhat begging the question. It is often enough true, though, that the team in a weaker division has an edge for wildcard entry over a team from a stronger division. And that always looms as a possibility in baseball wildcard races, which is one reason why, in this corner, we do not like wildcards at all.

The races for division championships make a little more sense. At least all the teams within a division play all the same clubs. But MLB has even messed that up.

But we do think it makes a difference. It's only sensible to think it makes a difference. Hence, the contrivances of the First Division, the Bud Selig East and all of the other competitions created on this site. If MLB believes its regular season competition with all these imbalances is legitimate, then nothing we can dream up with these imbalances is any less legitimate on that basis.

Many years ago, your friendly Major Leagues of professional baseball believed that a championship season called for a balanced schedule, at least an arrangement in which the playoff contenders would play the same schedule towards determining who went to the playoffs.

Seems fair. If one team plays an easier schedule than another, then why should the team prevailing against the easier schedule take a playoff berth from the team that was slightly less successful against a slightly tougher slate of games?

It's an important point, which, like so many others, has been lost by Major League Baseball, in part because the media and the fans don't insist on it. But it is no less important for that.

Way back in time, before expansion, each of the Major Leagues had eight clubs. Each club within a league played each of the other clubs 22 times, adding up to a 154-game schedule.

In 1961 (in the American League) and 1962 (National League), we saw expansions to 10 clubs in each league, and they maintained the principle of balance by having each club play every other club in its league 18 times for a 162-game schedule.

In 1969, each league added two clubs and divided into two divisions. As the division winners were to meet in the playoffs, those teams played out schedules in which each team played every other team within its division 18 times and played every club in the other division 12 times each. The team that you beat (or that beat you) for the division title still played the same schedule that you played.

But the clubs in the west complained that they were losing home gates against the New York Yankees and the Boston Red Sox. In those days, before the business began to figure out television, the team in Minneapolis or Kansas City really suffered that lost gate against the Yankees. So, the AL went away from scheduling heavily within divisions and balanced its schedule as much as possible across the league, so each AL team played every club within its division 13 times and every club in the other division 12 times.

Balance still ruled. And when the National League expanded to 14 clubs in 1993, it followed that 13 and 12 format.

Following the 1994-5 player's strike, MLB began making all sorts of marketplace compromises, including the fool's gold of interleague play and the wildcards, which actually were to begin in 1994 but were postponed by the strike.

Now, we have each club in the Major Leagues trying to stuff 19 different opponents into a 162-game schedule. Each ends up playing every team in their own divisions 19 times each, every other club across its league six or seven times each, then each of five interleague opponents three, four or six times each. It's a ghastly concoction.

So, we can agree that the Bud Selig East and others like it on these pages smack of being arbitrary and accidental. But they are no more arbitrary and accidental than the playoff races across the Major Leagues, nor are they any more of a departure from the balanced structures that once made the playoff race an even fight. And the Major Leagues shouldn't be especially proud about that.