The Boston Red Sox rallied and the Arizona Diamondbacks held firm to finish 2015 as the top two clubs in the Third Division and win promotion for 2016. But the Colorado Rockies and Oakland Athletics are going down. 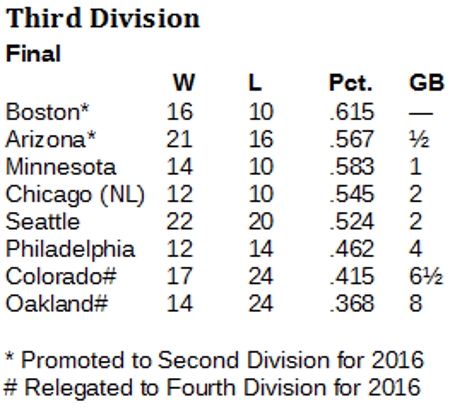 The Boston Red Sox won five of their last six games in the Third Division and rallied to the championship in 2015, overtaking the Minnesota Twins for promotion.

The Red Sox finished 16-10 in the Third Division to prevail over the Arizona Diamondbacks (21-16)  by one-half game.

The Arizona Diamondbacks finished second in the Third Division to take the second promotion to the Second Division for 2016. Ordinarily, placement is decided by winning percentage, but the Diamondbacks made it in on a rule that went into effect before the season to compensate for the inequities in baseball scheduling.

In this case, the Diamondbacks played 37 games, compared with 24 for the Twins. The DBacks finished one-half game behind the Red Sox, while the Twins finished one game behind. The Twins had the better winning percentage, .583 to .567.

The rule isn't ideal, but we have to work with what's really there. The Diamondbacks participated more fully in the Third Division than the Twins (or the Red Sox, for that matter) and won at a rate just below the Twins. We can argue with the rule, but we can't argue that the Diamondbacks don't deserve promotion.

The Twins led for much of the year, but stumbled out of a promotional spot by losing three of their last four while the Red Sox surged. The Chicago Cubs also came up fast, winning six of their last eight games.

The Colorado Rockies and Oakland Athletics were, without contest, the two lowest teams in the Third Division. Both are being relegated to the Fourth Division in 2016. Coming up from the Fourth Division are the New York Mets and the Chicago White Sox.