The St. Louis Cardinals took a big lead early and never looked back, easily winning their first undisputed Bud Selig West championship. The Cardinals had previously split the title once before. 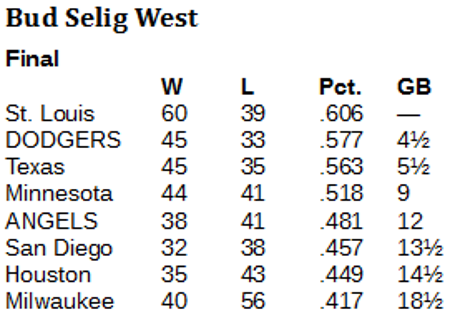 The St. Louis Cardinals faced no serious competition throughout the season as they captured their first undisputed Bud Selig West championship in 2015.

The Cardinals held an 8½ game lead on July 31. Although the Bud Selig West included two other Major League division winners (the Dodgers and Texas Rangers) and one other playoff club (the Houston Astros), none came close the the Cardinals.

The Cardinals won the league by 4½ games over the Dodgers and 5½ over the Rangers.