The Cleveland Indians made a nice bid for their third consecutive Bud Selig East championship, but no one was going to beat the Cubs, who won two-thirds of their games after July. 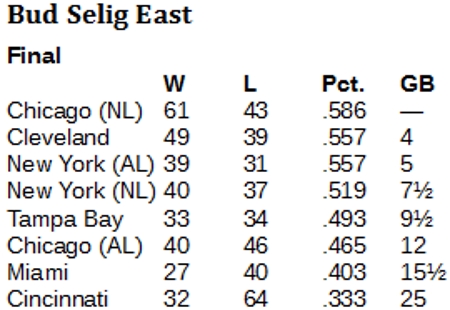 The Cleveland Indians fell short in their bid for an unprecedented three-peat in the Bud Selig East, overtaken by the hard-charging Chicago Cubs in the final two months of the season.

A tight race at midseason became a Cubs romp as the Chicagoans went 26-13 down the stretch to prevail by five games.

On July 31, The Cubs, Indians, New York Yankees and Chicago White Sox all were within 1½ games of the league lead. But while the Indians (20-15 in the last two months) and the Yankees (17-13) won going down the backside, neither could keep up with the Cubs.

The Cubs became the fourth club to win the Bud Selig East in the league's six-year history. The Yankees and Indians each have won twice and the White Sox have won it once.