We ended up declaring tri-champions for the First Division in 2015, giving equal due to the St. Louis Cardinals, San Francisco Giants and Tampa Bay Rays. On the bottom end, the Angels defended their 2014 title poorly to earn relegation, along with the Atlanta Braves. 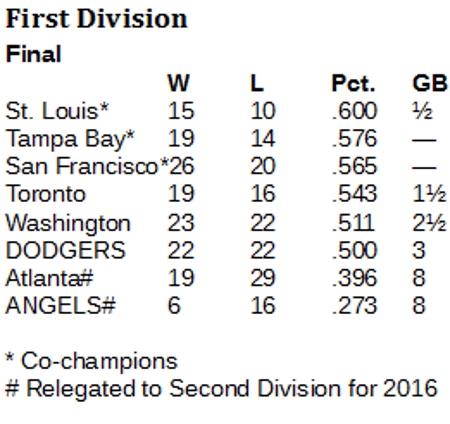 There was never much clarity on top of the First Division in 2016 as the St. Louis Cardinals, San Francisco Giants and Tampa Bay Rays set a strong pace all year and never came apart from each other.

In the end, it came to a split championship between those three clubs.

So, there was no boiling this one down to one club, or even two.

On the bottom of the First Division, the Dodgers escaped relegation by winning 12 of their last 20 after finishing July in last place at 10-18. The Dodgers finished 22-22, sixth place, ahead of the Atlanta Braves and the Angels, who both will be relegated.

The Angels won the First Division in 2014, but came back with a last-place performance in a limited 2015 schedule, finishing 6-16.

Coming up from the Second Division to replace the Braves and Angels in the First Division will be the Kansas City Royals and Texas Rangers.