It took the Kansas City Royals a few years to get moving in the promotion and relegation arrangement, but they finally made it all the way up to the First Division for 2016 by splitting the Second Division title with the Texas Rangers in 2015. 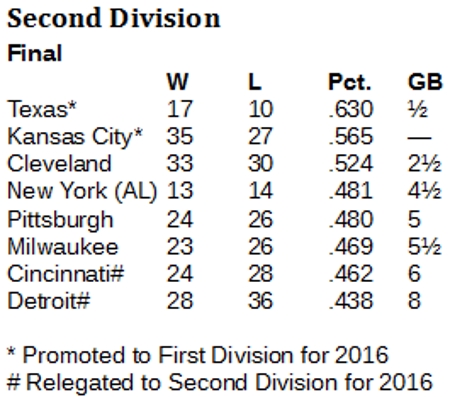 The Kansas City Royals were one of the original Fourth Division clubs when this accounting began in 2010, and they were the last team to escape the dungeon, advancing as the second-place team in 2013.

But when the Royals did advance, they advanced quickly. All the way to the First Division in two years, the shortest possible climb.

The Royals earned their First Division stripes for 2016 by splitting the Second Division title with the Texas Rangers in 2015. The Rangers finished 17-10 (.630) for the leading percentage, but the Royals (35-27, .565) finished one-half game up in the games behind column.

Thus, the Rangers and the Royals are the two teams gaining promotion for 2016. Replacing them in the Second Division for 2016 are the Angels and the Atlanta Braves, both of which were demoted from the First Division.

Kansas City spent 2010 through 2013 in the Fourth Division, seemingly with no chance to escape until it finished second in 2013. In 2014, the Royals rallied to finished second in the Third Division and gain another promotion, sweeping the Baltimore Orioles in a four-game American League Championship Series to secure that raise.