In the National League, the New York Mets won the 2015 pennant. But in the Chub Feeney League, composed entirely of National League clubs, the Mets were spoilers, enabling the St. Louis Cardinals to prevail over the Chicago Cubs. 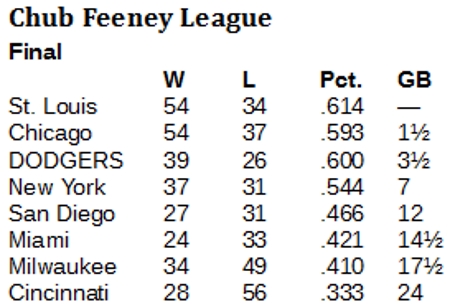 In the National League, the New York Mets won the 2015 pennant. But in the Chub Feeney League, they were spoilers.

With late help from the Mets, the St. Louis Cardinals won their third consecutive Chub Feeney League championship, this time by 1½ games over the Chicago Cubs. The Cardinals have won all three championships since the league expanded to eight teams in 2013 due to the Houston Astros moving to the American League and, therefore, the Joe Cronin League.

The Cincinnati Reds won the first seasons of the league, 2010-2012, when it had six teams.

The Cubs held a one-half game lead, at 54-33, over the St. Louis Cardinals (54-34) entering the National League Championship Series, which happened to feature two Feeney clubs, the Cubs and Mets.

Of course, the Mets swept in four games, which didn't help their own case much. With the sweep, the Mets (37-31) still finished fourth in the Feeney League.

But the four losses killed the Cubs, who fell all the way to 54-37, finishing 1½  games behind the Cardinals.