The Texas Rangers took it all the way to the end, but they won on the final day of the 2015 regular season to become the latest champion in the Joe Cronin League. 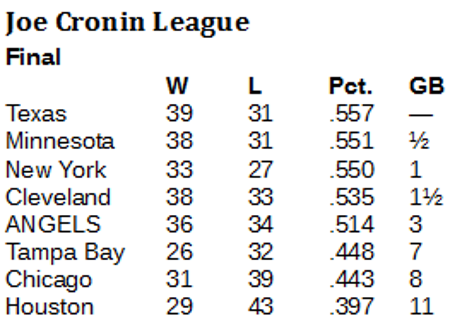 That's the story of the Joe Cronin League, a group of American League franchises central (more or less) to one old man's experience with the great game.

The Twins finished their Joe Cronin season by winning three of four at Cleveland Sept. 28-Oct. 1. As the Rangers opened their final series of the season on Oct. 1 with a 5-3 loss at home to the Angels, they were 38-29, while the Twins were in with their final record of 38-31.

It meant the Rangers needed only one win in their final three against the Angels to capture the title. And the Rangers took their time, finally securing that victory on the final day of the regular season with a 9-2 victory.

Six different champions in six years is a pretty good trick for a league that only had six clubs for the first three years of its existence. In 2013, the league added the Houston Astros and the Tampa Bay Rays due to the Astros joining the American League.