Three weeks left (and then some?) in baseball ordinals

The ordinal divisions in big league baseball, with promotion and relegation, are coming down to some interesting scenarios as the 2016 regular season nears its completion. But the postseason will still figure. 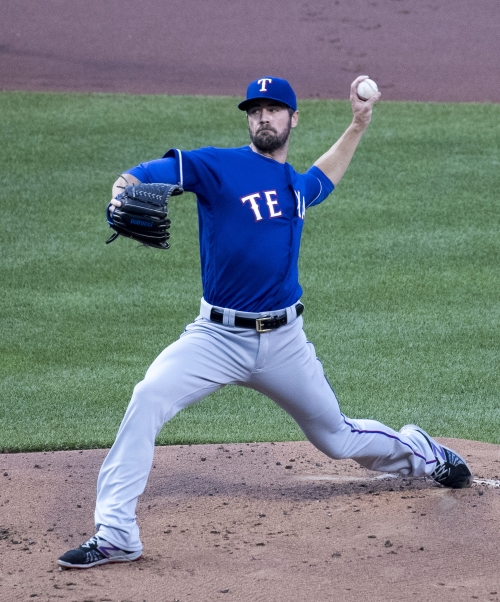 Cole Hamels has led the Texas Rangers to the top of the First Division, so far (Keith Allison/Creative Commons Attribution-Share Alike 2.0 Generic license).

The final three weeks of the regular season are setting up furious races for promotion and relegation in the ordinal divisions across big league baseball.

Here is a look at each division going down the stretch. We caution, though, that we count the postseason in all of our baseball standings. So, all we can say for sure is what's coming down the line for the rest of the regular schedule. With 10 teams going to the playoffs in Major League Baseball (MLB), postseason implications promise to be thick.

The top two dogs here are the Texas Rangers and the Dodgers, both six games over .500. The Rangers, at 13-7, have the percentage advantage at .650, while the Dodgers (19-13) hold a .594 percentage. But there's enough left in this fight for the coveted First Division championship to turn it outright for the Dodgers.

The Dodgers have six games remaining in the division, all against their rival San Francisco Giants. The final three will take place during the final weekend of the season, Sept. 30-Oct. 2, in San Francisco.

The Rangers have three games left, all at home against the Tampa Bay Rays during that same final weekend of the season.

The Rays are in a fight to stave off relegation as they battle to stay ahead of the bottom two clubs, the Kansas City Royals (12-15) and the St. Louis Cardinals (7-16). At 15-17, the Rays have six games left, three early this week against the Toronto Blue Jays and those last three in Texas.

The Royals have no remaining games, so they are frozen at 12-15. The Cardinals have four games left, all against the Giants. Even if the Cardinals win them all, they won't catch the Royals. The question is if the Rays can stay ahead of the Cards and Royals to prevent relegation. To succeed, the Rays need to at least split their final six games.

If the Rays can split, then the only other chance for the Royals to remain in the First Division is a giant collapse by the Giants, who, at 15-14, have 10 games left – those six against the Dodgers and their four against the Cardinals. If the Giants win just three, they will finish ahead of Kansas City's percentage of .444.

From the start of our promotion and relegation scheme in 2010, the Cardinals, a charter First Division club, are the only operation that has never been demoted. They finally captured a First Division title in 2016, and now they are all but certain to drop.

But we'll see if the Cardinals can get to the playoffs and tack together a run to save themselves. Of the eight First Division clubs, only the Rays are out of the hunt for October baseball. Could be a lot left to decide once the playoffs are set.

There is nothing unusual, however, about what is happening to the Cardinals. In each of the last three seasons, the club that won the First Division the year before plummeted to demotion. 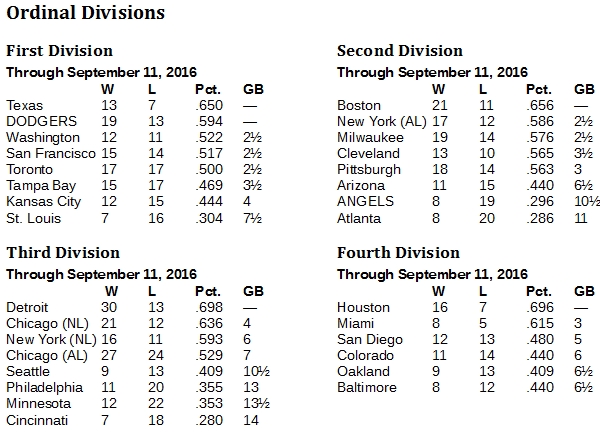 As the above standings show, this is a tight race for second place, and promotion, between the Yankees, Milwaukee Brewers, Cleveland Indians and Pittsburgh Pirates. The Boston Red Sox are the lead club with at least 2½ games on everyone else.

The Indians appear to be out of it, but we'll see what the playoffs bring. They are 13-10 with no regular season games remaining, and the math makes it impossible for them to finish in the top two before the postseason.

The Yankees have seven games remaining in the division, all against the front-running Boston Red Sox. The Pirates and Brewers each have three games remaining, and they are against each other.

The Angels and Atlanta Braves are way down low in this group. Both are going to the Third Division in 2017, guaranteed.

The Detroit Tigers have stampeded this group. They are 30-13, well ahead of a pack that includes two strong clubs in the Chicago Cubs and New York Mets. They are likely to win this group and move up in 2017.

But it isn't certain, even though the Tigers are four games up on the Cubs and six up on the Mets. There's still a lot left to play in this division.

The Tigers have seven remaining games, all against the Minnesota Twins, who are in a death struggle with the Philadelphia Phillies and Cincinnati Reds to avoid dreaded relegation to the notoriously sticky Fourth Division.

In second place, we have the Chicago Cubs, who are in the clubhouse at 21-12. The Cubs and Reds each have six games left, all against each other.

Behind the Cubs are the New York Mets at 16-11. However, the Mets have 10 games left, all against the Phillies and Twins. The Mets need at least eight wins to nudge ahead of the Cubs for the second promotional position. Otherwise, the Cubs move up and the Mets stay put.

Again, though, the playoffs could loom. The Cubs have all but clinched the National League (NL) Central, while the Mets hold the second NL wild card position. Last year, remember, the Mets swept the Cubs in a four-game National League Championship Series (NLCS).

Philadelphia's has nine games left, seven against the Mets and two against the Chicago White Sox. The Phillies are the sixth-place team, the team that would be spared if it all ended here. But it doesn't.

The Houston Astros are the comfy first-place club, 16-7. Their promotion to the Third Division in 2017 is all but assured. Their only possible Fourth Division postseason foe, the snake-bitten Baltimore Orioles, bottom of this group at 8-12.

The second-place club right now is the Miami Marlins at 8-5 (.615). One other club, the San Diego Padres, has a chance to meet the 10 win/.500 threshold during the regular season. The Padres 12-13, have three game left, all this weekend against the Colorado Rockies. If the Padres win all three, they would clinch the second position. If they win two of the three, they still would beat out the Marlins.

In that latter case, though, there's still one more contingency. If the Orioles and Astros both make it to the playoffs and the Orioles somehow sweep the Astros in a four-game American League Championship Series (ALCS), then the 12-12 Orioles would match the 14-14 Padres at .500. The Orioles would win that promotion, having defeated the Padres in three of their four meetings this season.