Here is a plan for realigning baseball that makes some regional sense. It places each team in three divisions at the same time. Some years ago, we proposed a way for Major League Baseball to realign without really realigning. The proposal was to keep the American and National Leagues as they are and overlay three regional leagues.

The idea works especially well during those seasons in which the interleague division pairings are East vs. East, Central vs. Central and West vs. West. The regional leagues would be, of course, a West League, a Central League and an East League.

We actually played it out in 2015, the only season, so far, in which that was the schedule and the two leagues each were divided into the right three divisions of five teams. The 2015 season showed that the regional approach is good fun to follow.

But what about the other two seasons out of every three, in which the major leagues give us pairings that can't possibly make sense? It's fun when the Dodgers play the Angels, but do we have to pay for it with meetings between the Baltimore Orioles and the San Diego Padres that have no meaning for anyone?

Last year, we worked up another arrangement, a bit more complicated. But it played out well enough, so we'll do it again this year, following the results on these pages.

We began by breaking the 30 major league teams into four regions, one for each quadrant of the country. Consider each of these a league unto itself. Call them quadrants.

Of course, it doesn't divide evenly. The division here is two quadrants of eight and two quadrants of seven. We put Chicago in the west, putting 16 clubs in that half of the country. Now, cutting the west in half, we have the northwest and southwest quadrants. Do the same with northeast and southeast, and we have four quadrants.

Here is how the quadrants played out in 2016. The games counted are head-to-head within each quadrant. 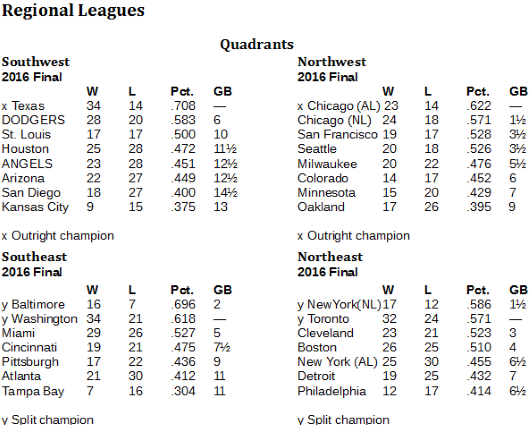 These don't come out perfectly. They come out half-perfectly. The western half is perfect. Each quadrant in the west has four clubs from each major league, so a lot of these teams will play each other. The east is a mess. The north half has only two National League clubs and the south half has only two American League clubs. Depending on how the the major leagues line up for interleague play, some teams stand to play light schedules within their quadrants – the Baltimore Orioles and the Tampa Bay Rays in the southeast and the New York Mets and Philadelphia Phillies in the northeast.

But that's not, for many reasons, a fatal problem. The main reason is that we're not done yet.

From these resources, the four quadrants, we now have the resources to form four new regional leagues, each with two divisions. We now can create the North League, the South League, the East League and the West League.

What this means is that the Angels are simultaneously in three leagues – three championship competitions -- as a member of their quadrant. At once, they are playing to win the Southwest quadrant, the West Division of the South League and the South Division of the West League. Of course, the Angels won none of those. The Texas Rangers, who really roughed up the clubs in their southwest quadrant, won all three of them.

Here is how the West League turned out.

Notice, the Chicago Cubs didn't win their own Northwest quadrant, finishing behind the Chicago White Sox. But the Cubs made up well more than enough ground after factoring in how the clubs in the Northwest and Southwest quadrants did against each other.

Deciding the league champion is a bit of a process. We're working with the real schedule, which doesn't conform directly to our purposes, so we make due. That's the case with all of this.

If the two division winners meet in the playoffs, then we can consider that the league championship series. If not, the we see if the two teams played head-to-head during the season and use that. If not that, then we simply won't declare a champion in that league that year.

In this case, the Cubs and Rangers happened to meet during the season and, unbeknownst to anyone, that set of games would retrospectively be declared the league championship series. And the Cubs won it, two games to one.

How about the Angels and the Dodgers in the South League? Here are those standings from 2016.

We go by winning percentages here, noting that we are bound to have wide disparities in the numbers of games played by any two teams. Obviously, the team playing more games has a huge advantage in the games behind column, if that team is good. In this case, the Nationals were only one game better than the Orioles by that measure, even though the Nationals played 26 more games than the Orioles.

In the Southeast quadrant, which includes the Orioles, we declared a split championship, because the Orioles, with a short schedule, won by percentage points against the Nationals, again, while the Nats won in the games behind column. In this case, since there's no reason to pick a playoff representative, we just went ahead and split the championship.

The Nationals got their championship in the East League, as the South Division champion. In this case, the title was undisputed. But there was no overall league champion declared here, since the Nationals never played against the Cleveland Indians, who won the East League's North Division.

Here, the champions were the Detroit Tigers, but really by a hair, and a technicality. We don't recognize winning percentages that go out more than three decimal places except as a distant tiebreaker. Like the standard, we round down to the thousandth of a point. If there is no difference at that point, we go to the games behind column.

As is always the case when playing out some different arrangement in baseball, we live with the fact that not all of the teams play each other. It's been known to happen in some college conferences, but baseball is unique among the major sports that play more than, say, 16 games in that it doesn't have a round-robin schedule all the way across.

In the NBA and the NHL, every team plays every other team at least once home-and-home and at most twice home-and-home. You can chop up those leagues however you want and everyone will play each other a fairly even amount.

But a baseball team that really gets around only plays about two-thirds of the other teams. A baseball team plays about half of its games against some set group of four other teams (the teams within its division), then plays the other half against a group of 15 teams (the remaining teams in its league and the teams in its interleague division). Then, there's another 10 teams it doesn't play at all.

With interleague play and expanded playoffs in the last 20 years, baseball has gone so far off the old path that it might as well pave a new way. By balancing out the schedule, leagues such as what we're supposing would work even better.