Bama leads Corn all-time, but Clemson has chance to move up

With a six-game title run in 2016, Alabama solidified its hold as the best team historically for the Ear of Corn traveling championship in college football, which began in 1979. But the holder of the title now is Clemson. 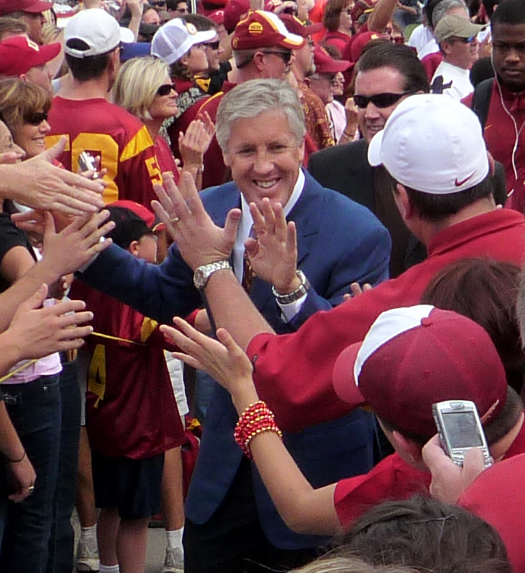 The Ear of Corn has kicked around college football for 38 years, and this traveling trophy has traveled a bit.

Nearing 500 games since this traveling designation was introduced in 1979, the prize has changed hands more than 120 times.

A team that's good with the ear will defend it several times, so you wouldn't expect four of this championship's best teams historically to hold it in the same year. But it worked out that way in 2016, with Texas Christian, Texas A&M, Alabama and Clemson all having a turn. All four programs are the top 15 by historic winning percentage in the Ear of Corn. 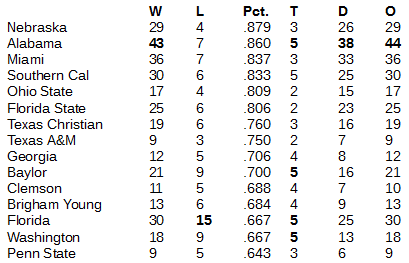 The 2016 season began with Texas Christian, which notched 17 Ear of Corn wins in 2014 and 2015 to storm into the historic top ten. But the Horned Frogs could only hold it for one week last fall, a 59-41 opening game win against South Dakota State.

A week later, Arkansas went into Forth Worth and pulled out a 41-38 win in two overtimes, giving the Hogs the ear for only the second time ever. Arkansas beat first-time suitor Texas State, 42-3, for its only title defense before losing at home, 45-24, to Texas A&M at Fayetteville on Sept. 24.

The Aggies made two defenses before falling to Alabama, 33-24, at Tuscaloosa on Oct 22. With that, the Crimson Tide captured the title for a fifth time, tying Southern Cal, Baylor, Florida and Washington for the most championships all-time.

Moreover, Alabama has defended the title 38 times, breaking a tie with Miami (FL) for most ever at 33. The Tide now is up to 38 title defenses in 44 defense efforts.

Alabama turned out an excellent choice as the provisional title holder. The Tide held the title for 19 games, finally losing to Mississippi State, 6-3, on Nov. 1, 1980, in Starkville. As the first true Ear of Corn champion to earn it on the field, the Bulldogs made two strong title defenses within the Southeastern Conference before losing it to Nebraska, 31-17, in El Paso in the Sun Bowl on Dec. 27.

Alabama went to the national championship game this January holding the Ear of Corn, the first time since 2009 that the ear was in the big game. But Clemson won the 35-31 thriller.

Clemson now has the Ear of Corn, winning it for the fourth time. The Tigers are 11-5 for the ear, 11th all time with their .688 winning percentage.

The Tigers can move up these standings with a winning streak. They will put the Ear on the line with their opening game of the 2017 season, Sept. 2 at home against Kent State.

Following are the 2016 results in the college football Ear of Corn. All-time results can be found here.