The Chicago Blackhawks have all but sealed up their second First Division championship in the second year of this ordinal arrangement. And the young Toronto Maple Leafs, Fourth Division also-rans last season, are winning their way to promotion. 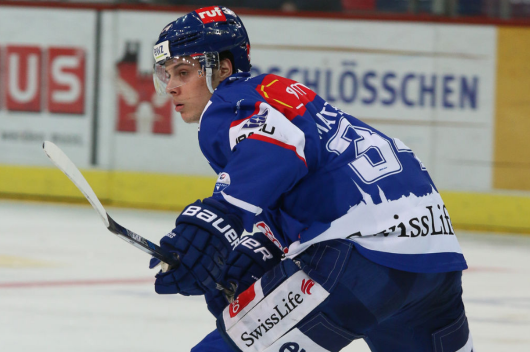 The Chicago Blackhawks are on the verge of winning their second consecutive title in professional hockey's First Division, romping through that group this season with 13 wins in 19 games. 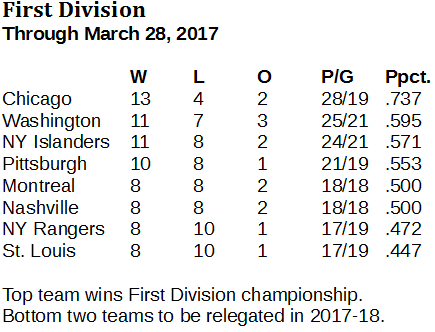 The First Division is a tough, even group, and it doesn't take a terribly struggling team to be relegated. This year, the teams in that position are the New York Rangers and the St. Louis Blues, who have identical 8-10-1 records against the top division.

The races for promotion out of the Second Division and Third Division both remain tight with less than two weeks left in the regular season. 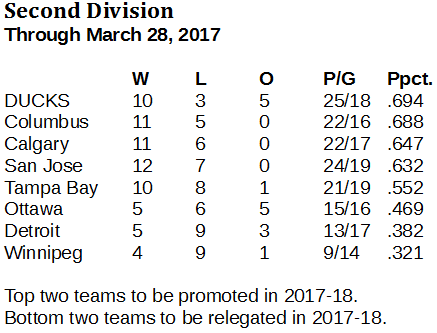 Relegation from the Second Division to the Third Division should involve the Detroit Red Wings and Winnipeg Jets, clearly the worst two teams within this group.

The Boston Bruins are running in front for the Third Division championship, earning 75 percent of their possible standings points. The scrum behind them for the second promotion is between the Minnesota Wild (.676), the New Jersey Devils (.656) and the Vancouver Canucks (.656). 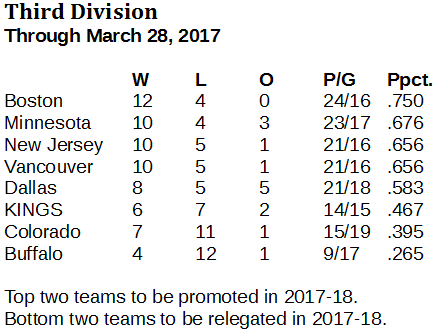 The Buffalo Sabres (.265) and Colorado Avalanche (.395) are the most likely teams from this group to be headed for the Fourth Division. The Kings (.467) are the next team in that line, but they appear to be safe.

The rookie-studded Toronto Maple Leafs, led by Auston Matthews, are stampeding the Fourth Division. They've won 75 percent of their standings points with 10 victories in 14 games. They are well ahead of Edmonton Oilers (.615) and the Philadelphia Flyers (.607), who are fighting for the second and final promotional position. 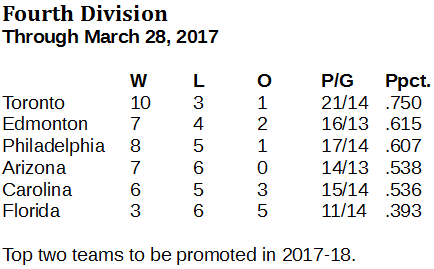 The Third Division Bruins and Fourth Division Maple Leafs both are angling to set the all-time record for standings points percentage in this young arrangement. The record belongs to the Pittsburgh Penguins and Washington Capitals, who both went .763 last season in the Second Division last season to win promotion to the First Division for this season.