The Montreal Canadiens came out of the gate fast in this first iteration of pro hockey's First Division. But the Chicago Blackhawks were more consistent throughout the season and wound up with the title.

The Chicago Blackhawks have to count their 2015-16 campaign as a disappointment, ending in the first round of the playoffs. That's no way to act for the defending Stanley Cup champions.

But the Blackhawks have this little something in their favor. They won the inaugural First Division championship in the way of pro hockey promotion and relegation being published in these pages. The Blackhawks won 13 of their 21 games against this high group, along with four overtime losses.

Total it up and that's 30 standings points out of a possible 42, a points percentage of .714 that was the best in the First Division. The Montreal Canadiens won their first six First Division games and appeared pointed at the title, but then lost six of their next nine and fell behind the more consistent Blackhawks for good. 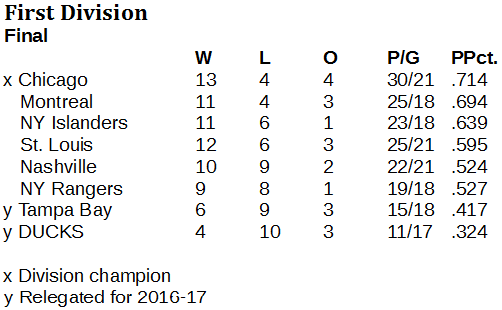 During the regular NHL season, the Ducks looked like a decent bet, winning the Pacific Division. But our First Division tells a different tale about the Ducks, who won only four times in 17 tries and finished at the bottom of this top level. The Ducks are going down to the Second Division in 2016-17, along with the Tampa Bay Lightning.

In the Second Division, the Washington Capitals and the Pittsburgh Penguins were easily the best of the loop, tied on top with 29 standings points of 38 possible (.763). If one must be crowned, it's the Caps for more wins in the same number of games. But both are promoted to the First Division in 2016-17, trading divisions with the Ducks and Tampa Bay. 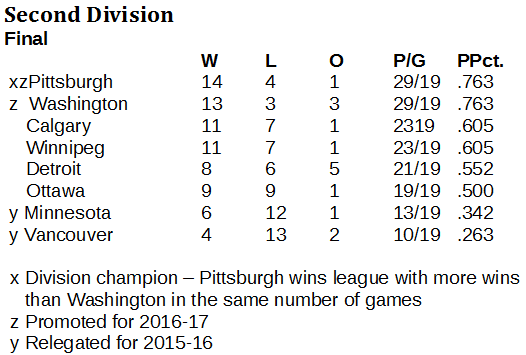 At the bottom of the Second Division, being relegated to the Third Division for 2016-17, we have the Minnesota Wild. The Wild were surprisingly outmatched against this level of competition, the second four playoff seeds in each conference from the 2015 playoffs. The Wild lost 12 of their 19 games in this division, despite qualifying for the 2016 playoffs. 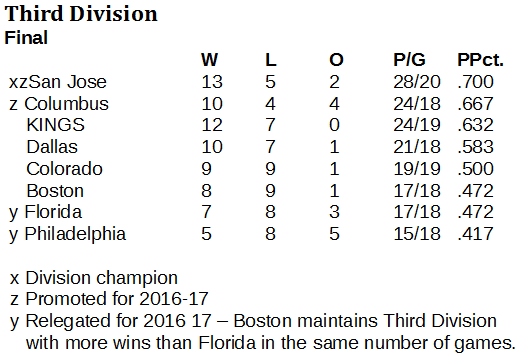 With promotion and relegation, though, rights can be wronged on the ice. The Sharks won 13 in this field, more than any other team, claiming the championship. The Blue Jackets lost less than any other Second Division team, four times in 18 games, a second place effort. The effect for both is the same. They will be promoted to the Second Division in 2016-17.

The Kings played a representative season, winning 12 of 19 games. But they finished two draws or a win short of overcoming the Blue Jackets to take that second promotional spot.

At the bottom of the division, the Colorado Rockies, Boston Bruins, Florida Panthers and Philadelphia Flyers scruffed to avoid finishing in the bottom two and being demoted to the absolute lowest caste, the Fourth Division. Florida and Philadelphia ended up missing the cut.

The Bruins escaped relegation, though their points percentage was identical with Florida's (.472). Boston got the reprieve for having more wins in the same number of games. 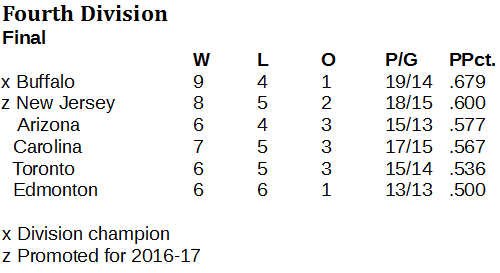 The Fourth Division played out evenly. Leaving out overtime losses, no team had a losing record within this group. The Buffalo Sabres were better enough often enough to claim their kingdom in this bottom rung promoting themselves to the Third Division in 2016-17, along with the New Jersey Devils.