The Ducks ran up 12 straight wins with the western professional hockey traveling championship to overtake the field and take the lead in the standings by the end of the 2015-16 season. 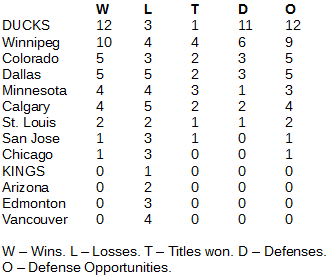 The Ducks held off a late surge from the Winnipeg Jets to win league honors as the best team of 2015-16 in the Ear of Corn throughout the western half of professional hockey in the United States and Canada.

The Ducks finished the season with a 12-3 record in these games. They won only one title, but they defended it 11 times before losing. They won that championship with a 3-2 win at home against the San Jose Sharks on March 2 in Anaheim and didn't lose again in the Western Conference until March 9, when they fell, 3-2, to the Colorado Avalanche in Denver.

Winnipeg began making noise, though, with a 3-0 home ice win against the Avalanche to claim the traveling championship. Though the Jets only defended that title once, they gained another title with a 5-1 win against the Minnesota Wild on April 3 in Winnipeg, then put together three straight defenses to end the season.

That still left the Jets at 10-4, which was short of the Ducks. However, the Jets notched four championships, most in the West. The Wild was next with three. The Avalanche, Dallas Stars and Calgary Flames each finished the season with two championships.

Of 14 teams in the conference, 13 teams played for the traveling prize, with Nashville as the only exception. Eight different teams won the prize. 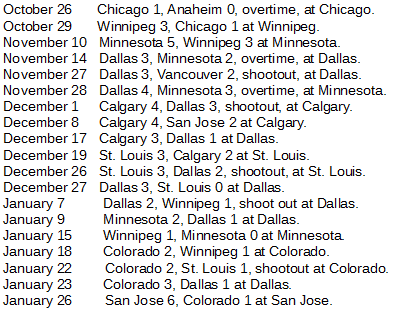 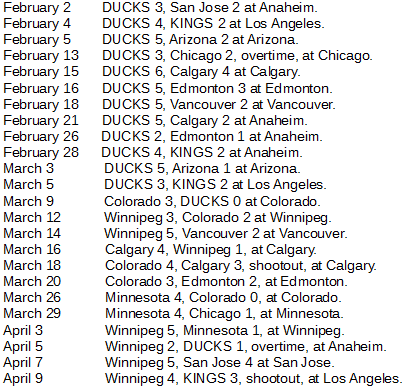