The winner across our first try at the First Division in North American soccer is FC Dallas. Meanwhile, the LA Galaxy squeezed by as the best among equals to take the Second Division.

FC Dallas held off a late surge to win the First Division in 2016, our first effort to apply promotion and relegation to the teams in Major League Soccer (MLS).

The Texas crew won its final three games to keep ahead of New York Red Bulls, who finished their First Division slate with four wins and two draws in their last six games. Seattle and Vancouver could never break from patterns of win one/lose one to challenge for the title. 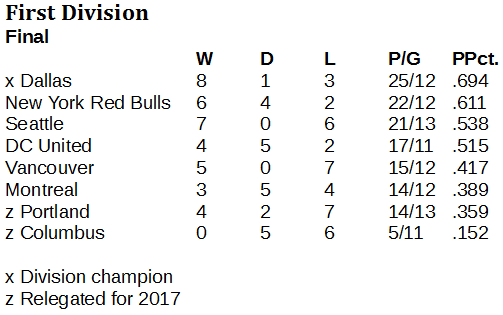 On the bottom of the division, the Columbus Crew failed to win a single First Division game, securing their banishment to the Second Division for 2017. The Crew is joined by Portland, which led the league with seven losses.

The Second Division was a tightly packed bunch in 2016. Of 45 games played within the division, 20 ended as draws. In that environment, eeking out a win or staving off a loss is more vital than ever. 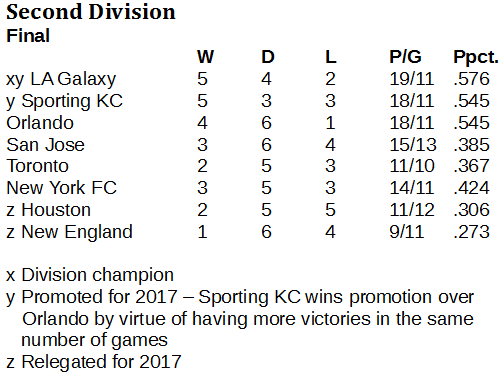 LA Galaxy won just enough in the Second Division to capture that championship by a thread over Sporting KC and Orlando. The Galaxy and KC each had five wins to lead the league. Orlando had only one loss, fewest in the division. But LA Galaxy prevailed with 19 standings points out of 33 possible, compared with 18 each for KC and Orlando, who also had 33 possible. For the second promotional spot, KC received the nod for having more wins in the same number of games as Orlando.

Houston and New England weren't that much worse in the Second Division than San Jose, Toronto or New York FC, but the they finished heavy in the loss column and are going down to the bottom division, the Third Division, in 2017.

But MLS is expanding this year, which will supply two new teams for the Third Division and bringing it up to a much more workable six teams. The new franchises are Atlanta United FC and Minnesota United FC.