The Florida Panthers easily won more games for pro hockey's eastern traveling championship in 2015-16, the first year of contention for the prize. The Panthers won 17 of 21 games in which they appeared. No other team even played in more than 10 games. 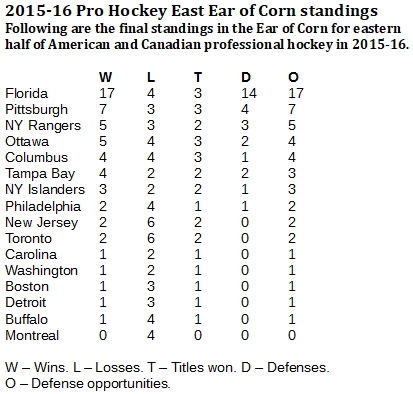 The Florida Panthers trounced all comers across the eastern half of the National Hockey League (NHL) during the first running of the eastern hockey traveling championship in 2015-16.

The Panthers finished 17-4 in games played for the traveling championship. The next best team in this competition, the Pittsburgh Penguins, finished 7-3 in Ear of Corn games.

However, the Panthers finished tied with the Penguins, Columbus Blue Jackets and Ottawa Senators, all with three championships.

All 16 teams in the Eastern Conference took at least one shot at this title, and 15 of them won it. The exception was the Montreal Canadiens, who lost all four of their attempts as Ear of Corn challenger in the East.

The Panthers did most of their damage during a run from Dec. 15 through Feb. 4, winning 13 of 14 games with this championship on the line. The Panthers won it with a 5-1 road win against the New York Islanders on Dec. 15, then defended it eight times before losing, 3-1, on the road against the Tampa Bay Lightning on Jan. 17. However, the Panthers took it right back from the Lightning in the next meeting for this distinction, 5-2 at Florida.

From there, the Panthers made three more title defense to finish easily ahead of the field. 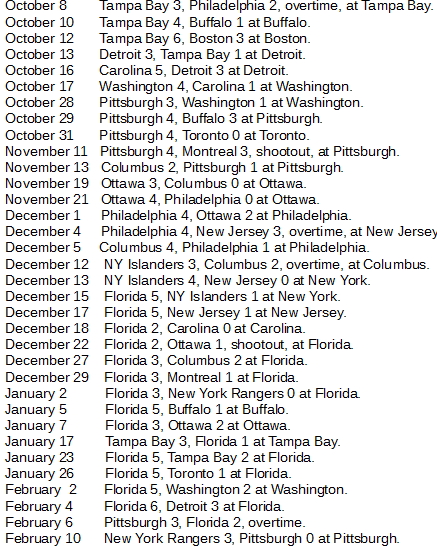 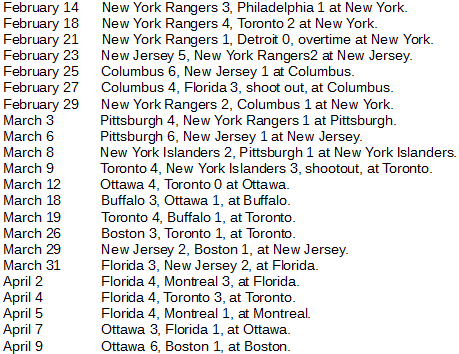