The NCAA Tournament has seen the long version of the men's college basketball traveling championship change owners four times in four games. If Gonzaga beats South Carolina Saturday, that will set a new record for consecutive games in which the championship changes hands. 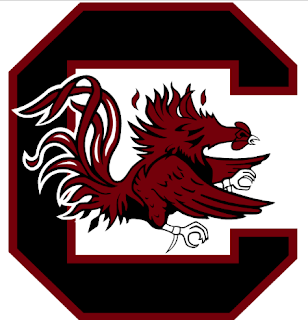 We haven't seen this very often at this time of year. It's the South Carolina Gamecocks athletic logo (public domain image).

We expect the men's college basketball traveling championship, the long version that includes the NCAA Tournament, to bounce around a little bit at tournament time.

But it's really bouncing around this time. We've now had four different championships in the last four rounds of the tournament after South Carolina downed Florida, 77-70, in the tournament quarterfinals on March 26.

Florida had taken the Ear of Corn from Wisconsin with an 84-83 overtime win in the Sweet 16 round. Before that, the ear reached the Big Ten for the first time with Wisconsin's 65-62 win on March 18 against Villanova in the NCAA Tournament's East Regional.

Wisconsin's victory also made certain that Villanova will not end the season with that title for the second straight year. Villanova won it last year with a 77-74 buzzer-beating win against North Carolina in last year's NCAA championship game.

Starting the 2016-17 season with the ear, Villanova went on to a smashing year with it, holding off 12 non-conference challengers of varying difficulty before taking it into the Big East portion of its schedule.

Once in the Big East, the ear bounced around – first to Butler, then Creighton, then Marquette, then Providence, back to Villanova, back to Butler and Seton Hall before Villanova recaptured it at the Big East Tournament.

But Villanova comes out pretty well in this season's results despite the loss to Wisconsin. The Wildcats now hold a 24-4 record all-time in the full-season ear, moving ahead of North Carolina (17-3) on the all-time victory list.

Wisconsin's victory came on the Big Ten's second attempt to win the Ear of Corn. Purdue made the first bid, losing, 79-76, to Villanova at Purdue last Nov. 14.

Other conferences to hold the title are the Big East (36 games), the Atlantic Coast Conference (32 games), the Southeastern Conference (seven games) and the Pac-12 (four games).

South Carolina will put the traveling championship on the line Saturday night against Gonzaga in the Final Four, with the winner to face the winner of the other semifinal between North Carolina and Oregon. 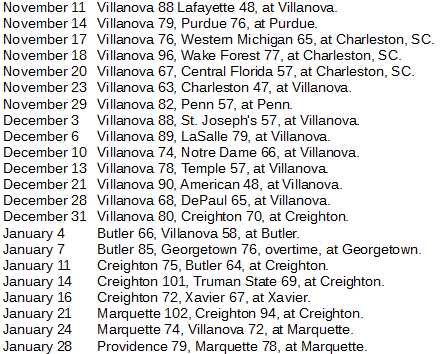 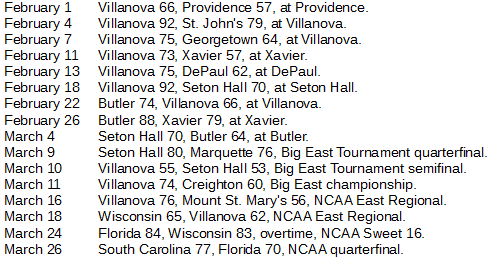