Juventus won 25 games in the Serie A version of the Ear of Corn, dominating the top Italian soccer league.

As Serie A champions in 2014-15, Juventus was made caretaker of the first traveling championship in that circuit. Immediately, Juve dropped a 1-0 bummer at home against Udinese and lost the crown.

It mattered little. Juventus regained the title with a 3-1 win at Empoli on Nov. 8 and began a streak of 25 wins. It finally ended on May 8, the next-to-last game of the season, a 2-1 loss at Hellas Verona.

So, Juventus is off to a great start with this prize. The teams with the next most wins are Genoa, Empola and Palermo, each with three. The only other teams to win it were Udinese, Hellas and AC Milan.

The season began looking like the prize would get around some. Empoli became with sixth team to win it with a   2-0 home field win against Genoa on Oct. 24. But when Juventus snatched it from Empoli, the prize froze. 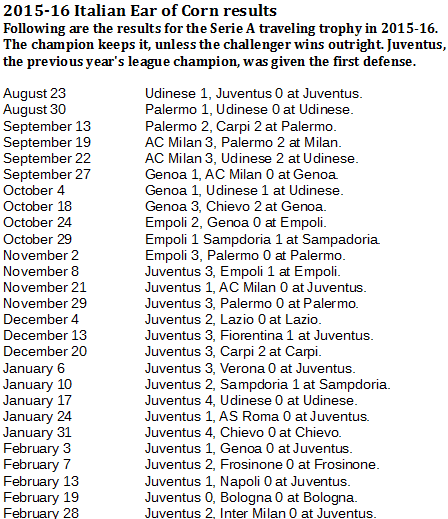