New York Red Bulls went on a 12-game winning streak near the end of the 2016 Major League Soccer season, becoming the top North American club in the first run of traveling designation. 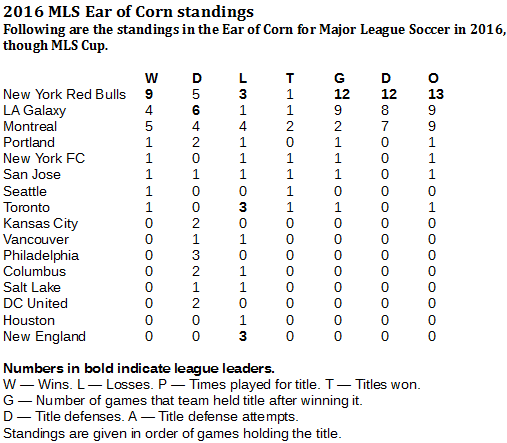 How does one measure the best when deciding who got the best of the traveling prize during the 2016 Major League Soccer (MLS) season?

That one is easy. It was the New York Red Bulls.

The Red Bulls played 17 games for the prize and lost only three of them, cruising to the Ear of Corn championship for the season.

The Corn changed hands in each of the first three games of the year before LA Galaxy took off on a run of nine straight wins to establish the early lead. But the Galaxy, which originally took the prize from San Jose with a 3-1 win on March 20, then fell to the Montreal, 3-2, on May 29.

But the Impact took another crack at the Red Bulls in the first round of MLS playoffs and won it back in a 3-2 aggregate result.

By then, though, there wasn't time for the Impact to challenge the Red Bulls even if they went all the way, which they didn't. The Impact lost to Toronto in the next round, 7-5 aggregate. 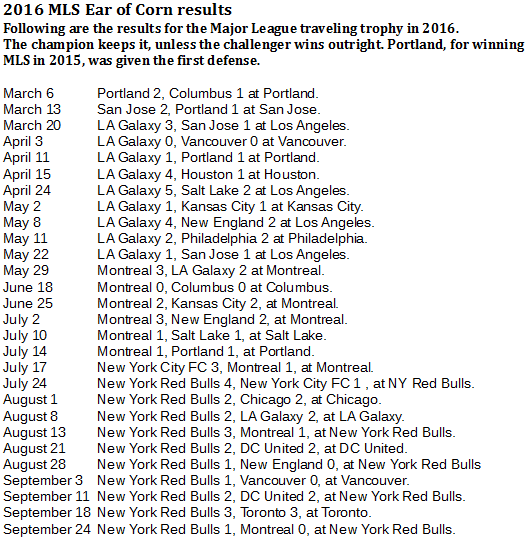