The 21st century has belonged to the New England Patriots in so many ways, so why not one more? The Patriots are the runaway winner in the Ear of Corn since it was first tracked with the 2000 season. 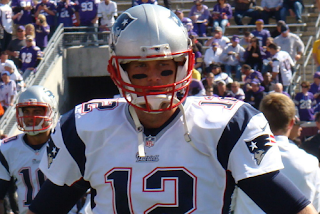 Quarterback Tom Brady has led the New England Patriots to, by far, the most success in the NFL traveling championship since we began tracking it in 2000 (Andrew Campbell/Creative Commons Attribution 2.0 Generic license).

The New England Patriots have dominated the 21st century NFL by every known measure.

Comes now another measure of the 21st century, that is less known. And – what do you know? – the Patriots dominate by that measure, too.

Since we began tracking the traveling championship in the NFL with the start of the 2000 season, the Patriots have owned it like no other team. As our standings of the top 10 NFL teams historically shows, the Patriots have won 44 Ear of Corn games, well ahead of the San Diego Chargers, who are next with 18 wins.The Rams, Indianapolis Colts, Minnesota Vikings and Green Bay Packers all have 17 wins all-time.

The Patriots also had a 10-game winning streak for the prize during the 2007 season, when they took a perfect record to Super Bowl XLII against the New York Giants. The Giants won that game, 17-14.

Thus began a 12-game Ear of Corn winning streak for the Giants, before they finally lost it on Dec. 7, 2008, in a 20-14 home field loss to the Philadelphia Eagles.

But none of those is the all-time longest winning streak for the Ear of Corn. That distinction belongs to the Green Bay Packers. Starting with a 31-25 win against the Pittsburgh Steelers in Super Bowl XLV on Feb. 6, 2010, the Packers won 14 straight before succumbing to the Kansas City Chiefs, 19-14, in Kansas City on Dec. 18, 2011.

Nor do the Patriots hold the all-time record for Ear of Corn championships. The Patriots have won six of them, tied for third all-time with the Vikings, Chargers, Kansas City Chiefs, New Orleans Saints and San Francisco 49ers. The Seattle Seahawks are second historically with seven traveling titles. The Oakland Raiders are the all-time leader with eight.

In the top 10 standings given here, you will notice that the Raiders are not included. It seems peculiar that a team that has won the most titles ever wouldn't be one of the best ten teams of all time.

A peculiarity, perhaps, of the Ear of Corn. Though the Raiders have won as many such championships as any other NFL team, they are, arguably, the worst team ever playing for this prize.

But the Raiders have stumbled much more often than not. Their overall record in Ear of Corn games is 12-18, giving them the most all time losses, barely more than the Jets (6-17). The Raiders have only successfully defended the prize four times after eight championships.

Following are the Ear of Corn results for the NFL in all three that are tracked – the NFL, the AFC and the NFC. The results for other seasons can be found here. 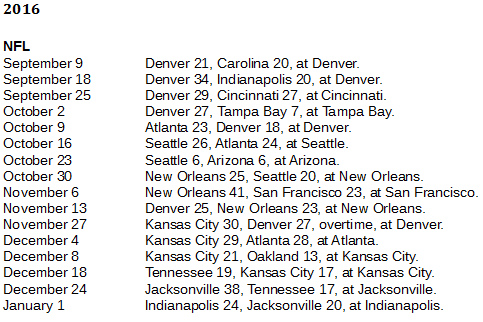 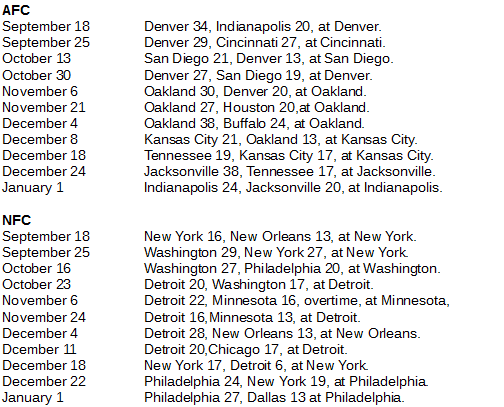