The San Antonio Spurs, promoted this season to the First Division, have stormed through the top level with a 13-3 record, already clinching the championship. Meanwhile, the Clippers aren't far from promotion – or a fight for promotion. 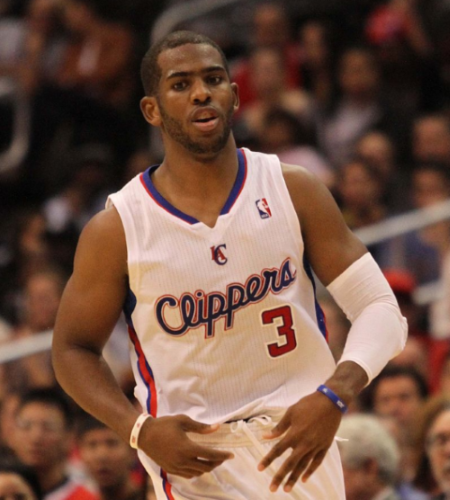 Chris Paul and Clippers are leading the way at the moment in the Second Division. But that could change quickly (Verse Photography/Creative Commons Attribution-Share Alike 2.0 Generic license).

Drama has been in short supply during the first two seasons of pro basketball's First Division.

Each season has produced a dominant champion, with the San Antonio Spurs and their 13-3 performance this season following the Golden State Warriors and their 18-1 output last year. The Spurs already have clinched the title this year, holding a three-game lead on the Atlanta Hawks (10-6).

The relegation side, likewise, has little left to be decided. The Boston Celtics (7-13) and Toronto Raptors (6-13) are all but ticketed for the Second Division next season. The Houston Rockets (7-10) are the next team on that cut list, but they are not imperiled with two weeks left in the season.

Last season, the Rockets barely escaped relegation because the Clippers had too many injuries for that to happen. The Clippers slipped to the Second Division this year, along with the Portland Trail Blazers. 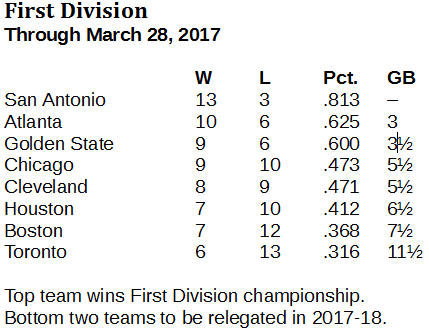 The Spurs were promoted to the First Division this season, along with the Celtics. But those two teams had radically different fortunes this season against the top tier.

Following last season's romp, the Warriors have settled into the third place this season, holding a 9-6 record.

As of now, the Clippers have the best total record in the Second Division, and they should be headed back to the First Division next season. But those waters remain murky. 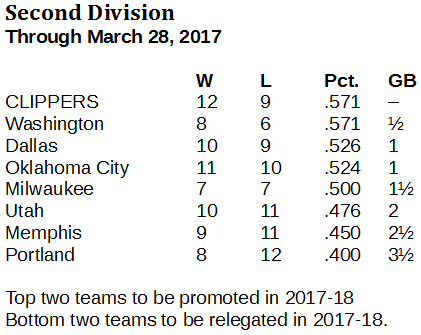 The Clippers are 12-9 in the Second Division, tied with 8-6 Washington with a .571 winning percentage, though the Clippers hold a one-half game lead. However, the Wizards are at Staples Center Wednesday night for an important showdown with the Clippers.

The Clippers would gain clarity with a win, which would clinch the Second Division championship and promotion back to the top level. But if the Wizards win, then they move into the top spot outright, and the Clippers would suddenly be fighting for promotion.

The Oklahoma City Thunder (11-10) is right there with the Mavericks, and the Milwaukee Bucks (7-7) aren't far behind. The Thunder will play the Bucks at home on April 4, then finish out their Second Division schedule on April 5 at Memphis. The Bucks' game with Oklahoma City is their only remaining game in the Second Division.

Memphis and Portland are the two bottom teams in the Second Division, and both appear headed downstairs next year. Unless, somehow, the Jazz crumbles even worse.

Down in the Third Division, the New Orleans Pelicans are on a light schedule, being the only western team at that level. The Pelicans are in the clubhouse at 9-5. Their .643 winning percentage is the best in the third tier, though the Pelicans are a game behind the Indiana Pacers (15-9) in the games column. In the event that one team finishes first in percentage and another finishes first in the games behind column, those are the two teams being promoted. 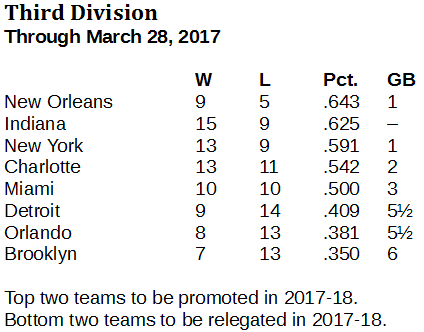 The New York Knicks (13-9) also remain in strong position for promotion. They have only two more games for making their case, both this week against the Miami Heat.

The standings on the bottom of the Third Division are tight. The Detroit Pistons (9-14), the Orlando Magic (8-13) and the Brooklyn Nets (7-13) all are fighting against relegation, which is the plight for the two teams finishing at the bottom of this level. 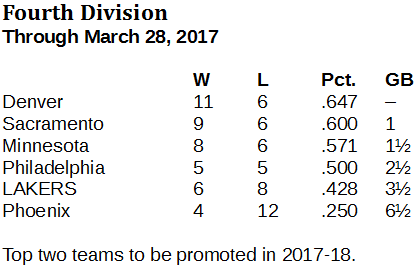 The Denver Nuggets, demoted to the Fourth Division this season, apparently will climb right back out. The Nuggets (11-6) hold a comfortable lead for the Fourth Division title. The Sacramento Kings (9-6) and Minnesota Timberwolves (8-6) are battling for the second promotional spot out of the basement.