Nowhere in America during the last four years is any other college women's basketball team even close to the University of Connecticut. The Huskies are so good that they raise a question here and there. (This piece originally was published on EarofCornAwards.com on April 8, 2016.) 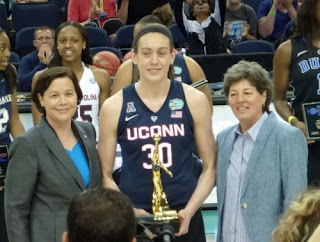 Breanna Stewart, center, won four national championships in her four years at the University of Connecticut. Here she is receiving the Wade Trophy in 2015 (Sphilbrick/Creative Commons Attribution-Share Alike 4.0 International license).

Long before we thought about applying the Ear of Corn to women's college basketball, the University of Connecticut was dominating the sport.

So, nothing really changes with UConn trouncing Syracuse, 85-51, for the national championship Tuesday night. UConn finished the season with its fourth consecutive national championship and a 75-game winning streak. It now has been more than three years since UConn last lost in regulation time – a 61-59 loss to Notre Dame on March 12, 2013.

So, there's no question about UConn. UConn is the best.

The question here is about the Ear of Corn, which UConn holds in both versions for women's college basketball.

Once upon a time, the idea was hatched to establish a traveling trophy across college football. Well, we had to start somewhere. So, we started with Alabama because it happened to be 1979 and Alabama had won the 1978 national championship.

We couldn't really say that Alabama "won" the Ear of Corn. We just gave it to Alabama as a start. But every time Alabama won a game with the Ear from that point, we counted it as a defense, so we end up saying that a team is defending a title that it didn't actually win in the first place.

In a lot of sports, this doesn't end up being a problem. The Corn starts changing hands early, and it happens often. But from the time we began tracking the Corn at the start of the 1979 season, Alabama wouldn't lose a game until Nov. 1, 1980, a 6-3 loss at Mississippi State.

So, Alabama ended up defending the title 19 times without having won it. On the totals, it might look a little strange. But that's just going to have to be the Corn's heritage in some sports.

It seems odd to say that UConn still hasn't "won" an Ear of Corn. The Huskies have destroyed everyone in their path, and that includes the very best competition in their sport. It's not like the Huskies are ducking people.

But we still can't say they've won it, just because they haven't lost it since we gave it to them.

We're going to have to say that, at this point, no one has yet won the Ear of Corn in women's college basketball.

But UConn has defended it 38 times in as many opportunities. 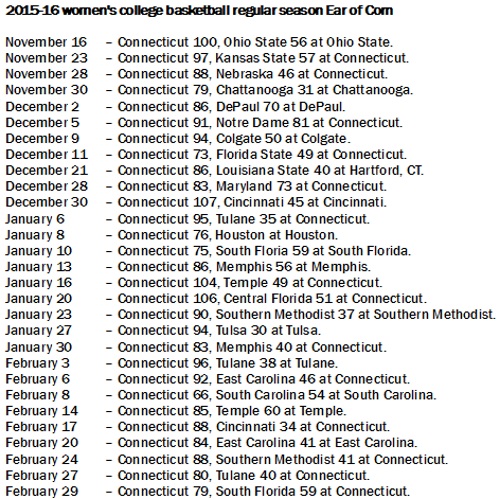 And here are the results for the postseason: