The Golden State Warriors were impressive enough in 2015-16 for securing the best regular season record of all time. But when we look at them against our First Division that season, they appear even better.

The 2015-16 Golden State Warriors regular season is in the books as the best ever for an NBA team. The Warriors finished 73-9, despite sputtering down the stretch with two home losses in April, finishing ahead of the 72-10 mark set by the Chicago Bulls in 1995-96.

Another way of viewing the Warriors is their performance against the cream of the NBA. Our scheme for promotion and relegation of pro basketball teams happens to originate with the 2015-16 season, putting the Warriors in the First Division. 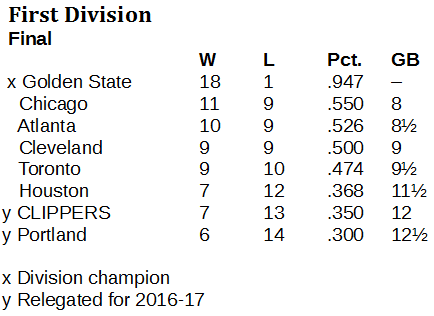 Considering only their games against these teams, the top four seeded teams from each conference a year earlier, the Warriors were a dominant 18-1. They always showed up when the game actually stood to be a test of basketball. Probably about half of their losses during the regular season came in raw tests of endurance that the NBA and NHL impose upon their teams.

Relative to other team sports, travel in the NBA and NHL is dizzying. Even with all the soothing perks they receive, we simply cannot expect peak athletic performance night after night from athletes who get on and off of planes and into and out of airports as much as these NBA and NHL players.

When the Warriors lost, it sometimes smacked of raw burnout. Like the first time they lost, after opening the season with 24 straight wins. It was December 12, 2015, in Milwaukee, the last game of a seven-game road trip that lasted 13 days. The Warriors were in the second game of a road back-to-back, coming off a double-overtime win the night before in Boston.

The Bucks won easily, 108-95. The Warriors had no legs, making nine of 36 shots from outside the lane and only six of 27 from the three-point zone. The Bucks were a middling team hungry for a marquee win at home and the Warriors couldn't put up a fight.

But when the Warriors went up against a real contender like the Clippers, the Cleveland Cavaliers or the Atlanta Hawks, the Warriors were bright-eyed and bushy tailed. An 18-1 slate against this group of First Division teams is impressive, because it was pretty representative of the league's best. Seven of the eight teams here went to the NBA playoffs, five survived to the quarterfinals, three to the semifinals and two to the finals. 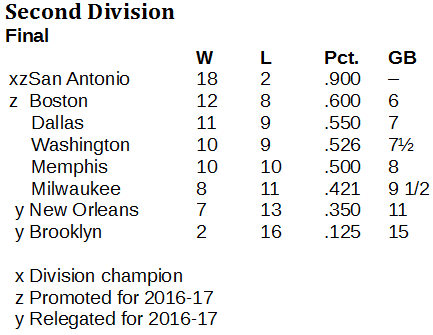 To the extent that our groupings are wrong, promotion and relegation is a pretty satisfying way to fix them. For example, it's absurd that the San Antonio Spurs wouldn't appear in any grouping of the league's best eight teams. Turns out, the Spurs had a down regular season, for their high standards, seeding only fifth in the Western Conference for the 2015 playoffs. So, the Spurs began 2015-16 season in our Second Division.

You knew that couldn't last, and it didn't. The Spurs crushed the Second Division with a championship 18-1 record, easily securing their promotion to the First Division in 2016-17. Joining the Spurs in promotion are the Boston Celtics (12-8), a distant second-place team that barely beat out the Dallas Mavericks (11-9) and the Washington Wizzards (10-9).

For the Spurs and Celtics going up, there must be two teams coming down to the Second Division from the First Division. The two teams relegated were the Clippers and the Portland Trail Blazers. The Clippers, with their injuries, couldn't swing with the heavyweights and finished only 7-13 against against the First Division. The Trail Blazers were a vulnerable First Division entrant, the best team in a weak division, and their 6-14 performance against this top tier proved that they do not belong.

On the bottom of the Second Division we find the Brooklyn Nets, who were, predictably, in over their heads at 2-16 in this tier. The Nets will go to the Third Division in 2016-17. Also going down are the 7-13 New Orleans Pelicans. The Milwaukee Bucks appeared doomed to relegation for much of the season, losing nine of their first 12 Second Division games. However, the Bucks rallied with five wins in their last six games and finished 8-11, safely ahead of the Pelicans. 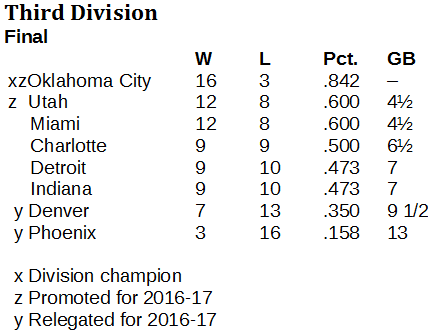 The Third Division produced another easy winner in the Oklahoma City Thunder, which finished well ahead of the Utah Jazz and the Miami Heat. At 16-3, the Thunder is well qualified for Second Division promotion. The Jazz and Heat both finished 12-8, and they split their two games head-to-head. The Jazz gets the prize, though, for points difference in those games. The Heat won, 92-91 on Dec. 9 in Miami, and the Jazz won much bigger, 98-83, on Jan. 9 in Utah.

Phoenix finished 3-16, way in over its head, and is now headed to the Fourth Division, along with the Denver Nuggets. 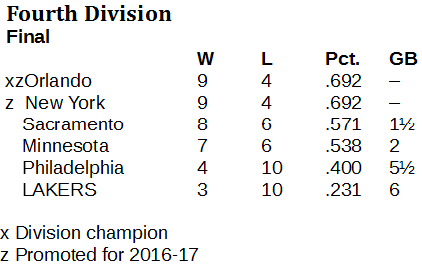 Now we come to the Fourth Division, the dregs of the league. We have teams here like the Lakers (4-10) and the Philadelphia 76ers (3-10) who can't even hold up against this competition. Both should be relegated out of the Fourth Division, but there's no place lower for them to go.

Perhaps there isn't much to be shown for Phil Jackson's executive leadership of the New York Knickerbockers, so far, but we can say the climbed out of the Fourth Division. The Knicks tied for the division title with the Orlando Magic at 9-4. Both are promoted to the Third Division in 2016-2017.