A two-month run with nine straight wins took West Ham United to the first year's honors in the traveling prize for the English Premier League.

Leicester City came through the 2015-16 English Premier League season as the surprise champions, crushing the rest of the league with only three losses in 38 games and winning by 10 points over second-place Arsenal.

However, the winner of our traveling championship for the season is West Ham United, which won 16 Ear of Corn games and three championships. West Ham began its best run with a 1-0 home victory against Tottenham Hotspur on March 2 and held it for nine games before falling, 4-1, to Swansea City at home on May 7 at West Ham.

The only other club to win it more than once was Watford, which then managed a total of one title defense.

Of the remaining clubs, Leicester City had the best showing, a six-game winning streak from Nov. 7 (a 2-1 home win against Watford) until Dec. 19 (a 3-2 home loss to Everton).

Other champions who defended the title at least once included Manchester City, Liverpool, Watford, Tottenham Hotspur, and Swansea City.  One other club, Newcastle United, won a championship without defending it. The Magpies were relegated at the end of the season.

Chelsea began this exercise as the caretaker champion, but only held it for only one game before losing it, 3-1, at Manchester City on Aug. 16. 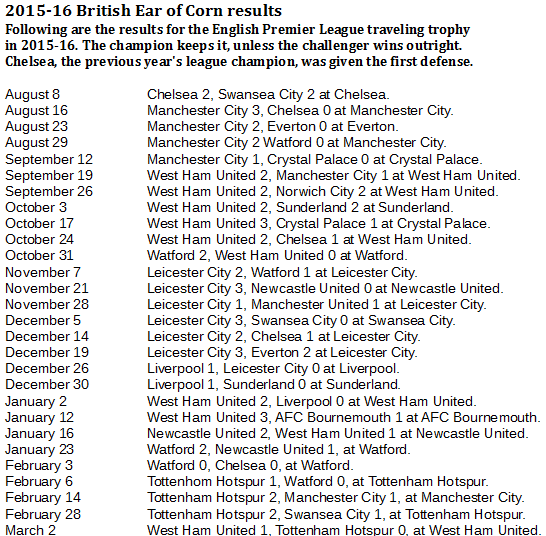