AL back on top of Selig West with Texas Rangers title

The Texas Rangers once more asserted the American League's success in the Bud Selig West, finishing ahead of the St. Louis Cardinals in a close race. 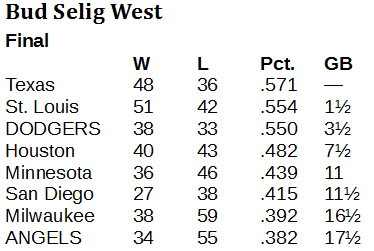 The Texas Rangers won a torrid race in the Bud Selig West, finishing 1½ games ahead of the St. Louis Cardinals for their second league title.

The Cardinals won the title in 2015, the only time in the league's seven-year history that a National League club won the league's undisputed championship. The only other time there has been an NL team with the title was 2012, when the Cardinals and Dodgers split it.

Only twice in the league's seven-year history has the winner of the Bud Selig West been the champion of either the Joe Cronin or Chub Feeney Leagues.