The St. Louis Cardinals, once more, were the best team in the Allen. It's been that way every year since 2011, when this traveling championship across the National League was started. This time, though, the Cardinals barely won. 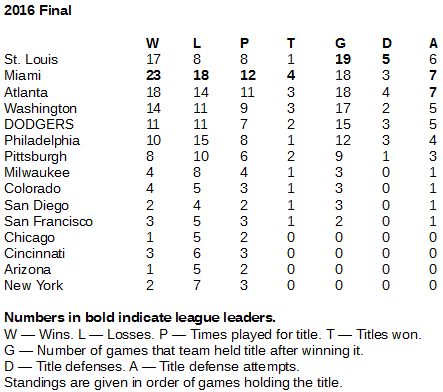 The St. Louis Cardinals have been so dominant in the National League traveling championship, which we call the Dick Allen Award, that we can't just give it to someone else in a tie-breaker call.

So, it went to the Cardinals again in 2016, though just barely over the Miami Marlins. The Marlins actually finished 2016 with the most wins (23) and the most championships (four) for the Allen. However, the Marlins were quite lax in defending the championship, succeeding only three times in seven efforts.

Thus, the Cardinals, who won only one championship during the season, still finished the season with the most games holding the title with 19, compared with 18 for the Marlins.

The Cardinals won their championship by taking two of three from the Milwaukee Brewers in Milwaukee, then made five defenses before losing three of four at home to the Pittsburgh Pirates July 4-7.

The Marlins had several chances to catch the Cardinals going down the stretch, but they could not make their championships last. The Marlins turned in two one-and-done titles in August, then lost a challenge in Atlanta during the final week of the season that could have put them over the top.

So, the Cardinals are Team of the Year again. In six years of following the traveling championship though the National League, they lead in every category. Their record in Allen games is 199-126 with 21 titles, 50 defenses in 71 attempts and 238 games holding the championship. No other NL team is even close. The Cardinals have been Team of the Year every season, it will remain that way until someone can beat them. 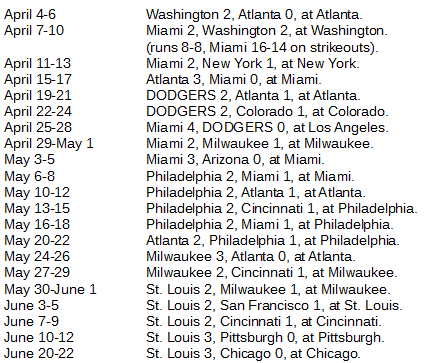 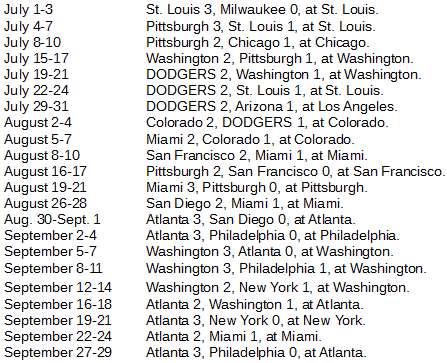