A tight race in the Bud Selig East ended with no clear winner. The title ended in a split between the New York Mets and the Chicago Cubs. 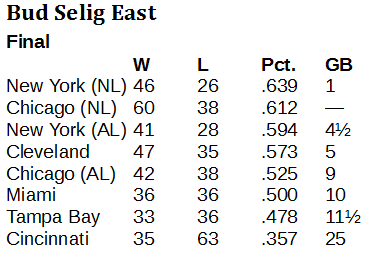 The Chicago Cubs and the New York Mets split the Bud Selig East in 2016.

The Yankees, who won the American League-only Joe Cronin League in 2016, fared much worse in this regionalized mashing of the Joe Cronin and Chub Feeney Leagues, finishing 4 1/2 games off the pace.