Mariners best of a weak lot in Happy Chandler West

Nobody in the Happy Chandler West was good enough to even be in the expanded playoffs across big league baseball. Somebody had to win, though. It was the Seattle Mariners. 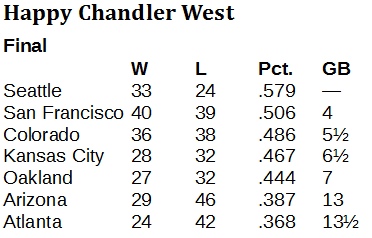 In a division with no 2016 playoff clubs, the Seattle Mariners were the best in the Happy Chandler West.

The Mariners, at 33-34 and .579, finished four games ahead of the San Francisco Giants, who did barely better than even with their 40-39 record.