The New York Mets ripped through their Chub Feeney League schedule with a .644 winning percentage, taking the championship from the hard-charging Chicago Cubs. 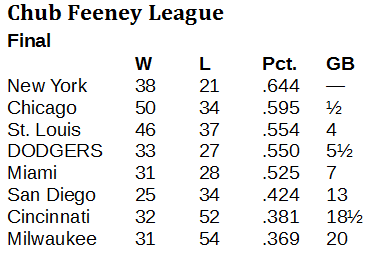 The New York Mets won their first Chub Feeney League championship in 2016 in a whopping percentage points advantage over the Chicago Cubs.

The Mets, being the only Eastern team in the Feeney League, tends to play a lighter schedule. In 2016, the Mets plied that schedule for a 38-21 record and a .644 winning percentage. The Cubs, who play a much heavier schedule as a Midwestern club, finished the year 60-46, which only was one-half game behind the Mets in the games behind column, but their .595 winning percentage finished well behind the Cubs.

The Mets became only the third different team to win the Chub Feeney League in its seven years of existence.

The Cincinnati Reds won the first three championships, when the league included only six teams. When the league expanded to eight clubs in 2013, the St. Louis Cardinals began a three-year run with the title.

In 2016, the Cardinals finished in third place, four game behind the Mets.