The Toronto Blue Jays, across the full schedule, were the best team in the Lee MacPhail League. But considering only the games within those clubs, the title went to the Seattle Mariners. 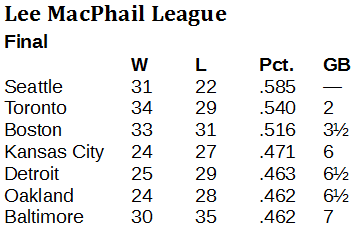 Though the Lee MacPhail League included a very strong 2016 postseason club in the Toronto Blue Jays, the Jays were outgunned for the league championship by the Seattle Mariners.

But it was a tightly packed league, with all seven teams finishing within seven games of each other. The basement club, the Baltimore Orioles, were 30-35 and .462, seven games out of first place.