The New York Yankees won nothing else in 2016, but they captured the Joe Cronin League championship by three games over two playoff-bound American League clubs. 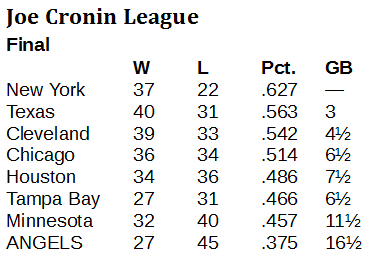 The New York Yankees became the first team to win the Joe Cronin League twice in its seven-year history.

The Yankees finished 37-22, three games ahead of the defending champion Texas Rangers (40-31).

The Yankees won their only other Joe Cronin League title in 2011.

The Houston Astros and the Tampa Bay Rays, who both were expanded into the league in 2013, are the only teams to have never won it.