The Boston Red Sox and the Cleveland Indians, two new First Division clubs, are the early leaders. Meanwhile, the Philadelphia Phillies went off to a fast start in the Third Division. 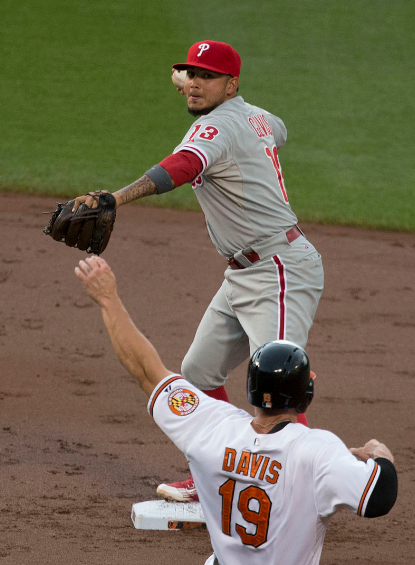 We shouldn't too surprised by the early going in the First Division. The two new teams are on top.

It's only the first week of May, of course. But history says new promotions thrive in the First Division. And recent champions flounder.

The Cleveland Indians (3-0) and the Boston Red Sox (5-2), newly promoted, are the early leaders. The San Francisco Giants (4-3) are right behind after winning two of three this week from the Dodgers (3-4) in Los Angeles.

The Washington Nationals, the only team yet to debut in the First Division, play their first game within the tier on May 29 in San Francisco. That will begin a run of nine First Division games in two weeks for the Nats. 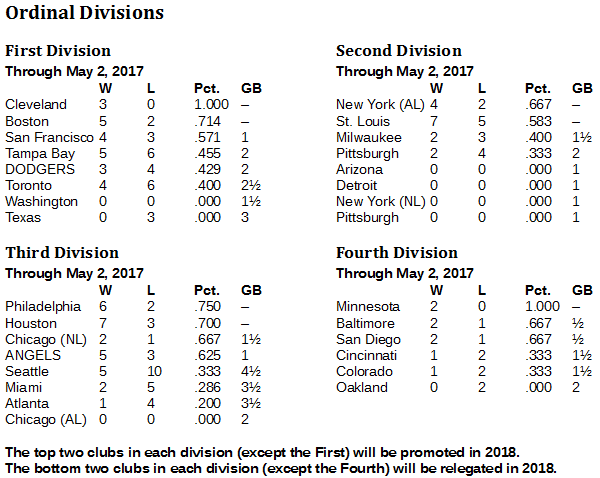 The Second Division still awaits participation from half of its clubs. The New York Yankees have the early lead, thanks to a three-game sweep of the St. Louis Cardinals. But the Cardinals will have plenty of chances to catch up because this level includes two other National League Central clubs, the Milwaukee Brewers and the Pittsburgh Pirates.

By contrast, the Third Division has seen heavy participation. The Philadelphia Phillies took the early lead, winning their first six games at this level before visiting Chicago and losing two games so far this week against the Chicago Cubs.

The Cubs, of course, won the World Series last year, but they still couldn't escape the Third Division, despite a 26-13 showing at this level. As it happened, the Detroit Tigers (35-16) and the New York Mets (28-13), surpassed the Cubs for promotion with their over-whelming performances.

At the bottom of this group, the Seattle Mariners already have cause for concern, losing 10 of their first 15 games.

In the Fourth Division, it's still very early. The team to watch is the Baltimore Orioles, who were knocked back into this group as a result of the 2014 playoffs and haven't been able to escape.