The Vancouver Whitecaps are an ordinary team across Major League Soccer this year, but they've won every game they've played in the First Division. Dallas, last year's winner, is right behind them. 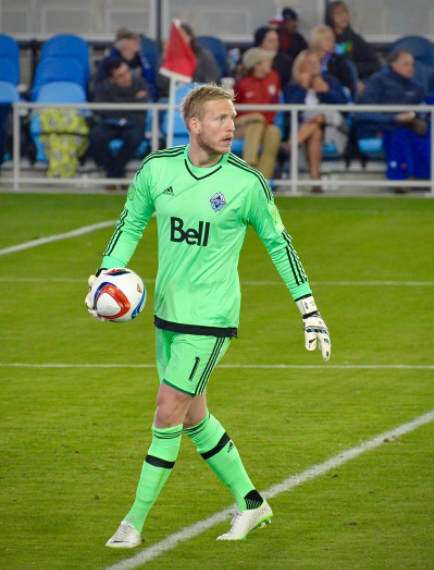 Danish national David Ousted, an MLS All-Star in 2016, has been in goal for the Vancouver Whitecaps since 2013 (Noah Salzman/Creative Commons Attribution-Share Alike 4.0 International license).

Those following Major League Soccer (MLS) this season probably aren't enamored of the Vancouver Whitecaps, the MLS version of a .500 team at 5-1-5 through May 22.

Only one other team in the First Division, Dallas (2-1-0) still doesn't have a loss within this group. So, the Whitecaps have the early lead, although, one-third through the season, it's hardly secure.

Last season went much differently for Vancouver, which finished 5-0-7 with a minus-five goal differential. They finished fifth in the eight-team First Division. Dallas won it, though with a little bit of a scare from the New York Red Bulls.

This year, the Red Bulls aren't scaring anyone, except for their fans. They are 1-0-3 in the First Division, looking down the barrel of relegation.

Leading the Second Division and angling for promotion next season are Toronto FC and New York FC, which both are in the top three of the MLS Eastern Conference. But Columbus and Orlando aren't far behind at this stage in the second level. The problem for Columbus and Orlando is that they're as close to relegation as promotion. The bottom team in the Second Division, Philadelphia, was newly promoted this year and probably is headed straight back down.

The bottom division, the Third Division, has a surprise in a brand new franchise, Atlanta, which has won its first three games in that loop. New England (3-0-1) also is putting on a good show at that level and could be moving up. 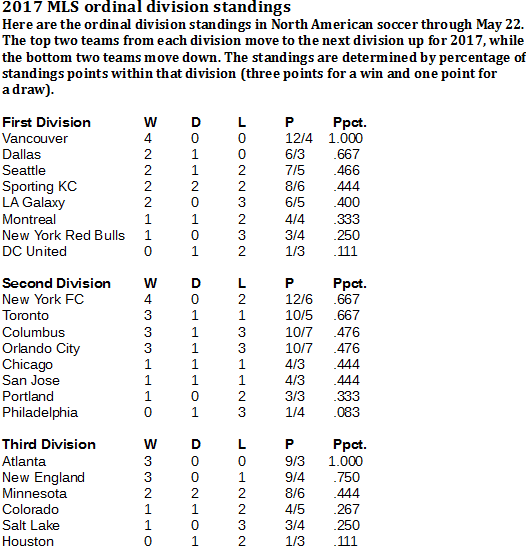