The Cincinnati Reds captured the continental baseball traveling championship in an unlikely way, by a combination of Billy Hamilton's mad dash from first base one day, and a rain out the next. Now, the Reds are locked in a split series with the Philadelphia Phillies with the rubber game coming on Sunday.

Billy Hamilton scored from first base on a ninth-inning single to left field on May 24, carrying the Cincinnati Reds to baseball's continental traveling championship (Public domain image).

It took a rain out, perhaps (we'll never really know), but the traveling championship in baseball finally crossed over to the National League last week for the first time since the middle of last August.

It happened when the Cincinnati Reds beat the Cleveland Indians in what ended up as a one-game series in Cleveland.

After the Indians won the championship last weekend against the Houston Astros by sweeping three on the road, the schedule set them up for their interleague series, two of them, against the Reds this week.

The first, a two-gamer in Cincinnati, went down in a split. Because the continental traveler doesn't change hands in a split series, the Indians kept it for the return series between the two clubs in Cleveland.

So, they commenced in Cleveland on May 24 for the second two-game series, and the Reds prevailed in the first game, 4-3, when Billy Hamilton scored the winning run all the way from first base on a single to left field in the ninth inning.

The next day, May 25, rain. The game was postponed until July. Of course, the traveling championship isn't postponed. It goes to whichever team leads the series, if that's the end of it.

So, the Reds finally took the traveling championship on their fourth try this season, and on the sixth try for the National League.

This weekend, the Reds took the prize to Philadelphia, where they have split their first two games with the Philadelphia Phillies entering the games of May 28. So, the continental traveler stays in the National League for at least a couple of more games, whichever teams leaves Citizen's Bank Park with it Sunday afternoon.

But maybe for not much longer than that. The Reds will go from Philadelphia to Toronto for three against the Toronto Blue Jays, an American League club. Could be that the AL will snatch it right back. Or maybe not. The Phillies will open a series on the road Monday against the Miami Marlins. 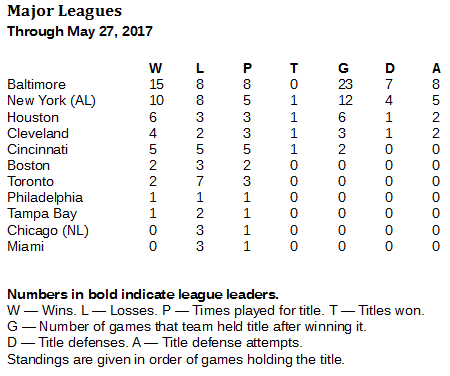 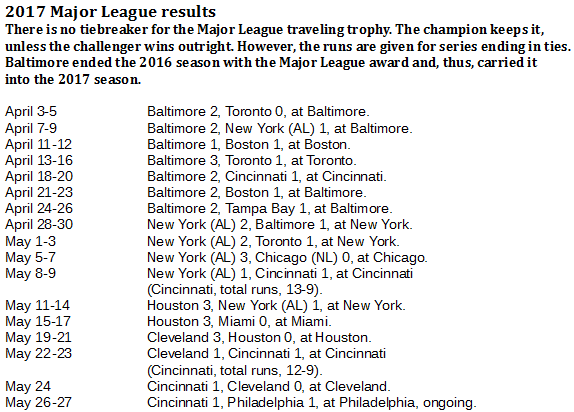