Raps, by a nudge, top team in east hoop traveler

No team dominated the pro basketball traveling championship across the East, nor were there even a couple of leading contenders. So, Team of the Year goes to the Toronto Raptors, who didn't do a lot, but they did more with what they had than others. 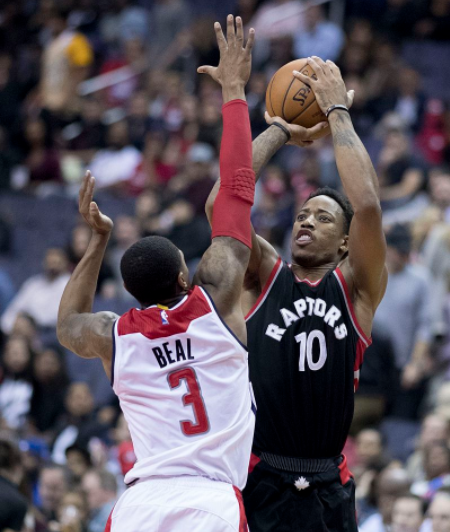 DeMar DeRozan helped the Toronto Raptors to wins in five of their six games this past season for the pro basketball traveling championship across the East (Keith Allison/Creative Commons Attribution-Share Alike 2.0 Generic license).

There's no obvious choice for Team of the Year in eastern traveling championship across professional basketball.

So, we'll make a choice that isn't obvious. The Toronto Raptors made more of their opportunities, relatively speaking, so they get this nod. But it is arguable.

The Raptors won five of their six games for the title and hold it going into the 2017-18 season. They won it twice, defending it twice the first time they won it in November and now still hold it with one defense in hand after a 110-97 capture on the road against the New York Knickerbockers on April 9.

But the Chicago Bulls and Atlanta Hawks both won seven times for the title, and each notched three titles during the year. However, neither was an especially good defender. Both made only four defenses in seven attempts, compared with three of four for the Raptors.

Another team deserving strong consideration was the Indiana Pacers, who were 6-3 in traveling title games across the East. The Pacers made four defenses in six attempts.

The two teams now vying for the Eastern Conference championship in the NBA, the Boston Celtics and Cleveland Cavaliers, lacked luster playing the the traveling title across the East. The Celts were 3-4 and won two titles, but failed in all three of their defense attempts. The Cavs were 2-3 with one title and one defense in two efforts.

Of 15 teams across the East, 14 won the title at least once. The exception was the Washington Wizards, who lost in their only crack at the prize.

Joining the Bulls and Hawks with an East-leading three titles were the Knicks and the Charlotte Hornets. The Detroit Pistons, and Orlando Magic also won multiple titles.

After dominating the East with 14 traveling championship victories in 2015-16, the Miami Heat turned in another good performance just now, 4-2, but with only one title, which it defended three times in four tries. 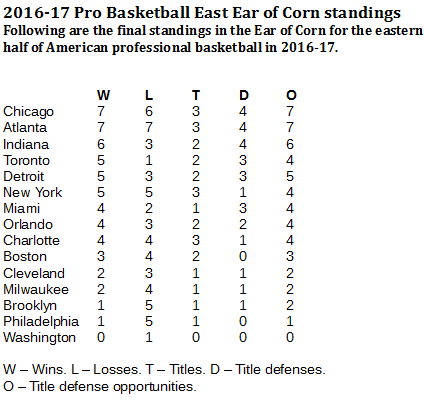 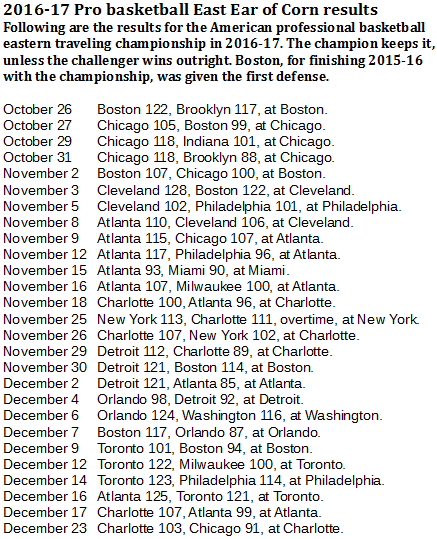 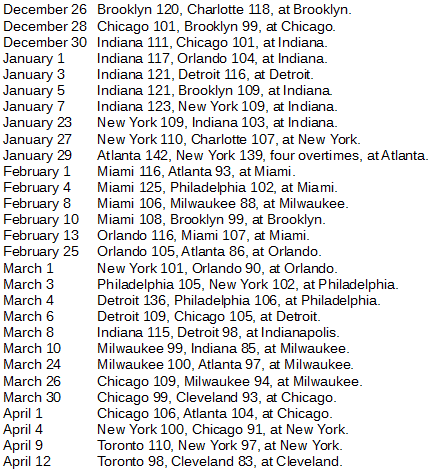