The San Antonio Spurs won the First Division across pro basketball, while last year's champs, the Golden State Warriors, fell to third. The Clippers, who were relegated last year, have fought their way back to the top level by winning the Second Division. 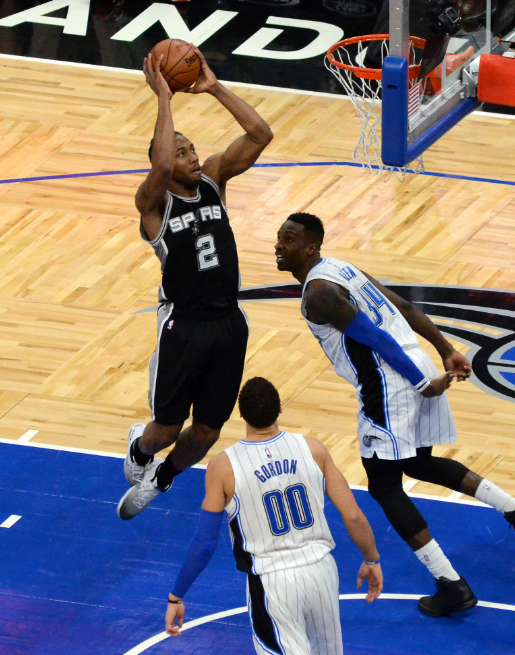 By the end of March, the San Antonio Spurs were in the clubhouse with a 13-4 record in the First Division, good enough to clinch the championship and their second consecutive division title.

In 2015-16, the Spurs blitzed through the Second Division with an 18-1 mark to earn promotion. In 2016-17, the Spurs were just about as lightly challenged in the top tier, despite the presence of the Golden State Warriors, who won it a year earlier with the same 18-1 record. This season, the Warriors finished third in the First Division at 11-6, two games from the top. 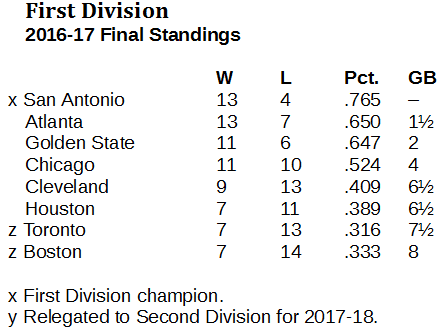 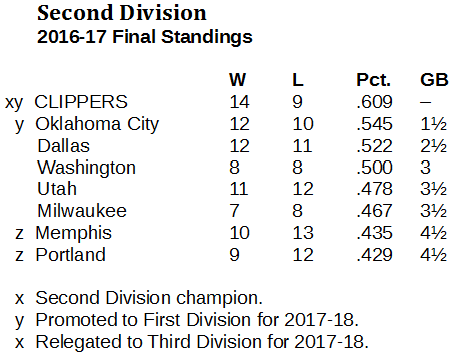 The Portland Trail Blazers, who began as a First Division team in 2015-16, are being demoted for the second straight year. The Blazers finished at the bottom of the Second Division this season and will go down to the Third Division next season. Also being demoted are the Memphis Grizzlies.

A tight race in the Third Division ended with the New Orleans Pelicans and the Indiana Pacers being co-champions, barely beating out the New York Knickerbockers. 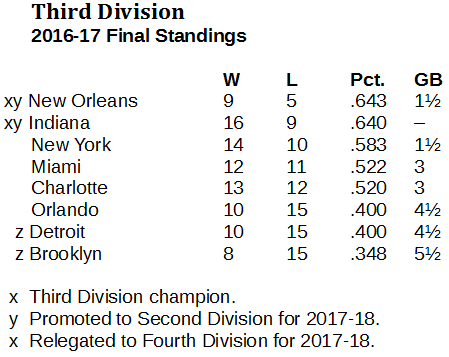 The race to avoid relegation to the Fourth Division was equally tight. The three teams fighting for survival were the Detroit Pistons, the Orlando Magic and the Brooklyn Nets. In the end, Brooklyn finished last in the Third Division. Detroit and Orlando finished tied for the next worst record. However, the Magic won the tiebreaker with a 3-1 head-to-head record against Detroit, which will be a Fourth Division team next season. 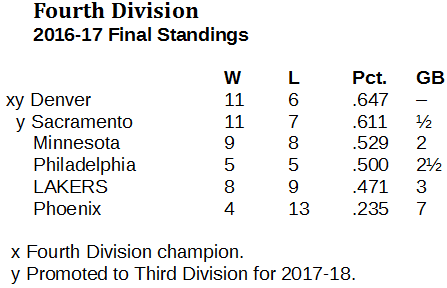 The Denver Nuggets, who had been demoted to the Fourth Division this season, fought their way back to the Third Division by barely winning the bottom rung ahead of the Sacramento Kings. The Minnesota Timberwolves had good shot at promotion, but they lost their final two bottom level games against the Kings and the Lakers, opening the second promotion for the Kings.